Students walk in a quad near Royce Hall on the UCLA campus in Los Angeles on May 13, 2020. On Friday, the school's former men's soccer coach was sentenced to eight months in prison for accepting $200,000 in bribes for a colleges admissions scam. File Photo by Jim Ruymen/UPI | License Photo

March 20 (UPI) -- The former head coach of UCLA's men's soccer team has been sentenced to eight months in prison for accepting bribes to help students get accepted to the school.

In addition to the prison time, Jorge Salcedo, 48, must serve one year of supervised release and forfeit $200,000, the same amount in bribes he accepted.

U.S. District Judge Indira Talwani of the District of Massachusetts handed down the sentence -- one of the longest associated with the so-called Operation Varisty Blues scandal -- on Friday.

Salcedo pleaded guilty in April to one count of conspiracy to commit racketeering. He originally pleaded not guilty to the charge in March 2019.

Prosecutors said Salcedo received $200,000 in bribes for agreeing to facilitate the admission of two students to the university as athlete recruits.

According to court documents, Salcedo agreed in 2016 with William "Rick" Singer, former head UCLA women's soccer coach Ali Khosroshahin and others, to gain admittance to the university for the daughter of Davina Isackson and Bruce Isackson in exchange for $100,000.

In 2018, he accepted a $100,000 bribe from Singer to recruit the son of his client, Xiaoning Sui, to the UCLA men's soccer team although he'd never played competitive soccer, prosecutors said.

Khosroshahin, Davina Isackson, Bruce Isackson and Sui have each pleaded guilty for their involvement in the scandal that centered around Singer, the former owner of a for-profit college entrance company who pleaded guilty to charges last year that included racketeering, conspiracy, money laundering and obstruction of justice.

Fifty-two people have so far been charged during the Federal Bureau of Investigation's Operation Varsity Blues, including celebrities Felicity Huffman and Lori Loughlin, and her husband Mossimo Giannulli.

U.S. News // 4 hours ago
Obama scales back 60th birthday celebration due to COVID-19 surge
Aug. 4 (UPI) -- Former President Barack Obama has scaled back plans to celebrate his 60th birthday this weekend in New England, due to a resurgence of COVID-19. 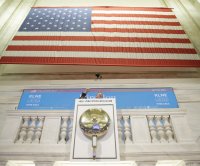