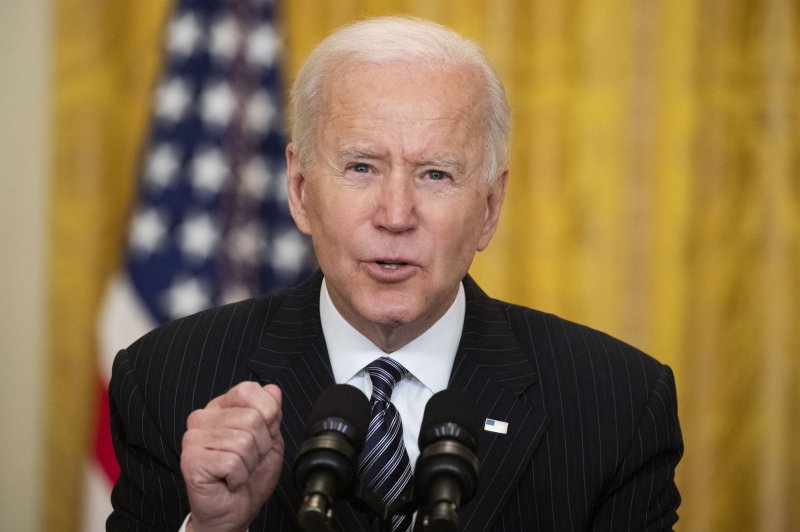 President Joe Biden delivers remarks on the state of COVID-19 vaccinations in the East Room of the White House in Washington, D.C., on Thursday. Photo by Michael Reynolds/UPI | License Photo

He said the milestone was expected to be reached Friday.

"I'm proud to announce that tomorrow, 58 days into our administration, we will have met our goal," Biden said during remarks in the East Room of the White House.

When he took office in January, Biden said he wanted to reach the 100 million mark within his first 100 days, which put the deadline at May 2. The administration is more than 40 days ahead of schedule.

"We're going to beat this, we're way ahead of schedule, but we've got a long way to go," he added. "We need millions more to get vaccinated."

Biden gave top priority to delivering coronavirus vaccines nationwide when he became president, directing his response team to launch dozens of federal vaccination sites across the United States and buying additional doses of the available shots from Pfizer, Moderna and Johnson & Johnson.

This month, Congress passed Biden's $1.9 trillion American Rescue Plan, which included tens of billions for numerous relief measures, including money to increase vaccinations at federal sites. It also included stimulus payments for many Americans and recovery aid for state and local governments.

"The Biden-Harris administration has been working around the clock to get America vaccinated," the White House tweeted earlier this week. "We've doubled daily vaccinations, secured enough doses for every American, and opened hundreds of sites across the country."

Vaccines from Pfizer, Moderna and Johnson & Johnson so far are the only shots approved for use in the United States to prevent COVID-19. Additional vaccines from AstraZeneca, Novavax and Sanofi could receive approval in the coming months.