Homeowner Jackie Reid clears the walk in front of her house after nearly 3 inches of snow blanketed St. Louis on January 27. The early morning snow storm was the first measurable snow fall in St. Louis this season. More snow is forecast through the Midwest. File Photo by Bill Greenblatt/UPI | License Photo

Feb. 28 (UPI) -- A swath of snow is forecast to streak across the northern tier of the country, opening the door for a blast of colder air to filter in from Canada.

Before sunrise Sunday, snow also began to spread into Minneapolis and St. Paul.

As of midday on Sunday, snow had ended across the Dakotas and Minnesota, but continue in Wisconsin and the Upper Peninsula of Michigan. Snow is forecast to continue into the early evening.

RELATED Heavy rain, thunderstorms to threaten the South into midweek

AccuWeather Meteorologist Matt Benz described early on Saturday that a band of heavy snow could develop with the storm, producing a small swath of heavy snow, despite being a quick-moving storm.

This band of snow did, in fact, form just north of Sioux Falls and west of Minneapolis on Sunday, producing isolated snowfall amounts of 7 to 8 inches of accumulation.

Even after snow has ended by later on Sunday, one more quick burst of snow is possible in some of the same locations on Sunday night and Monday.

Only a quick inch or two of snow is expected, but in places like northern Wisconsin and the Upper Peninsula of Michigan, this will be in addition to the first round of snow.

The second round of quick-hitting snow may allow for slippery conditions on roads and sidewalks that will linger into Monday morning.

Snow piling up across parts of the area will continue to make slow strides towards pulling some cities closer to their average winter snowfall.

In both cities, accumulating snow can occur as late as early May, depending on the year.

The waves of snow will help to usher in a spell of chillier weather across the northern Plains and Upper Midwest into Monday.

After mild day on Saturday, with temperature soaring above normal into the middle and upper 40s in the afternoon, cold air is forecast to move in along with and following the snow Sunday.

Temperatures in Sioux Falls, S.D.,, to Minneapolis struggled to reach the freezing mark on Sunday.

Fargo, N.D.; Minneapolis and Green Bay, Wis.,are all expected to only reach the 20-degree mark by Monday.

"Temperatures of this magnitude are, on average, 5-10 degrees below normal for late February or early March," said AccuWeather Meteorologist Nicole LoBiondo.

The cold air invasion will be brief, as the mild air across the central Plains pushes northward back into the region by Tuesday.

Another shot of cold air may reach the Upper Midwest and Great Lakes for the first weekend of March.

U.S. News // 2 hours ago
Nevada Assembly repeals death penalty, sends to Senate
April 13 (UPI) -- Nevada's Assembly voted Thursday to abolish the death penalty, a bill that, if signed into law, would make the state the 24th to outlaw the punishment. 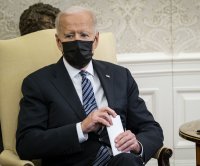