Feb. 20 (UPI) -- President Joe Biden declared a major disaster in Texas as power outages are declining but water shortages continue to pose problems due to damage caused to pipes and water mains by the subfreezing cold this week.

On Saturday, the White House announced President Joe Biden approved the declaration for all 254 counties and ordered federal assistance to supplement state and local recovery efforts in the areas affected by severe winter storms beginning Feb. 11.

CNN reported that Biden may visit the hard-hit state next week.

He earlier authorized FEMA to provide generators and supplies and was "ready to fulfill additional requests."

After power failures hit nearly 3 million and dropped under 65,000 Saturday, the state's more vital need is clean water with more than half the populations told to boil water -- if they are getting any.

Austin Water, which serves over 1 million in the Austin metro area, said Friday that it had about 32 million gallons of water stored, well below the required amount for an effective system.

RELATED More snow on the way for the Midwest, Northeast

"For a healthy system, we need to maintain a minimum of 100 million gallons in storage," the utility said on Twitter. "As we work to repair and restore our water system, we need everyone to conserve water as much as possible. Using as little water as possible will allow us to put excess water produced into storage, which is critical for the health of the entire system."

Austin Water said water pressure was restored on Thursday to the major pipelines that are "the backbone" of the city's water distribution system. The agency said a top priority remains getting hospitals back in service, although three major hospitals in the region did have their water restored on Thursday.

RELATED A winter storm leaves Texas with a black eye

Cities including Houston remained under a boil water notice on Friday. Houston Mayor Sylvester Turner said Houston Public Works has received 4,900 calls regarding burst pipes around the city. A mass distribution of bottled water began on Friday morning in Houston for residents who can't boil water.

At least 47 people have died from the winter storm in Texas and nine other states, officials said Friday, according to NBC News.

One of the stormiest weather patterns in decades triggered rounds of snow and ice all the way to the Gulf Coast this week, as Arctic air displaced by the polar vortex sent many locations into a deep freeze.

Power outages statewide dropped below 63,000 by Saturday afternoon, according to PowerOutage.us, which is down from 2.7 million households Wednesday.

Officials say the remaining outages in the state are no longer due to a lack of generation, but rather due to damage from the ice storm or large industrial facilities that volunteered to go offline to help reduce stress on the power grid during the emergency.

The Electric Reliability Council of Texas, which manages the state's power grid, said Friday that emergency conditions it had implemented earlier this week had been lifted, but power conservation was still encouraged.

"There is enough generation on the electric system to allow us to begin to return to more normal operating conditions," ERCOT Senior Director of System Operations Dan Woodfin said in a statement.

According to the Texas Tribune, Texas was only "seconds and minutes" away from its power grid suffering a catastrophic failure that could have resulted in power outages lasting for months. To prevent such a disaster, ERCOT officials implemented rolling blackouts beginning early Monday as the historic cold began to take hold amid unprecedented energy demands.

"It needed to be addressed immediately," Bill Magness, the president of ERCOT said, according to the Tribune. "It was seconds and minutes [from possible failure] given the amount of generation that was coming off the system."

The state's National Guard was deployed to help transport those in need of warmth to one of the hundreds of warming centers that had opened in the state.

Numerous record lows were set in the Lone Star State again on Friday, including in San Antonio. However, a much-needed warmup is on the way for the Plains in the coming days, AccuWeather meteorologists say.

Temperatures could be anywhere from 30-50 degrees higher across the Central states next week. After several days with temperatures peaking in the mid-30s, including a high of only 25 on Monday, Houston is expected to reach the mid-60s on Sunday and eventually the low 70s by next Wednesday. The average temperature in Houston during February ranges from 54 at the beginning of the month to 59 around Feb. 28.

Austin reached above freezing for the first time in a week on Friday. Temperatures will steadily rise into the 50s and 60s over the weekend before highs approach 70 on Wednesday, which would actually be slightly above average for the city.

A record-setting streak also came to an end in Waco, Texas, on Friday. After 205 consecutive hours at or below 32, a streak that began over a week ago, the city finally broke above the freezing mark around 12 p.m. local time.

The previous record of consecutive hours at or below freezing was 150 hours from December 1983 and approximately seven days in January 1948. The January record was prior to the tracking of hourly data, the National Weather Service in Fort Worth said. Waco residents can look forward to the mercury hitting 60 by Monday.

About 65% of the United States, not including Alaska and Hawaii, remain covered in snow with a snow depth that averages 6 inches. Earlier in the week it was 72%. 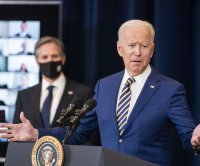