New U.S. COVID-19 deaths down; cases under 100K for 1st time since November 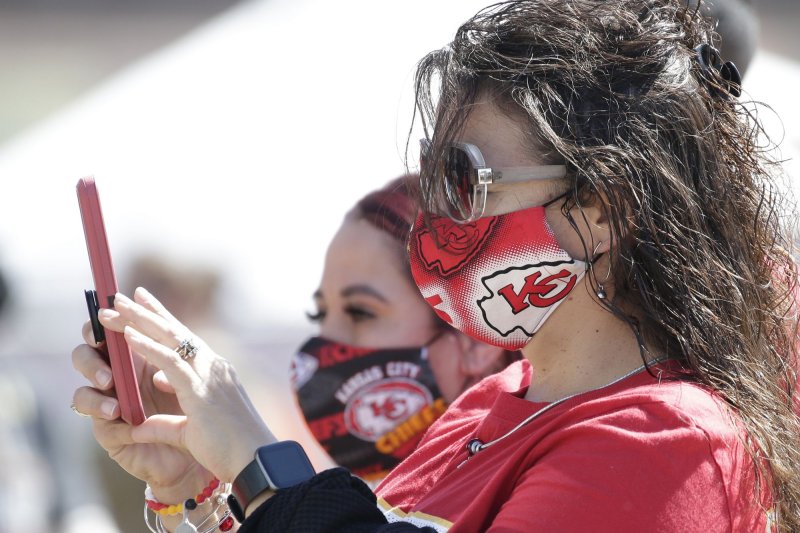 Masked fans take photos at the NFL Experience near the Tampa Convention Center ahead of Super Bowl LV in Tampa, Fla., on Friday. Photo by John Angelillo/UPI | License Photo

Feb. 8 (UPI) -- New COVID-19 cases and deaths in the United States have reached significant lows, according to updated data on Monday -- with the former falling below 100,000 for the first time since early November.

According to data compiled by Johns Hopkins University, there were only about 88,000 new cases on Sunday. That's the lowest one-day figure since Christmas Day and the first time since Nov. 2 that new U.S. cases have been below 100,000.

For much of January, new cases nationwide exceeded 200,000, according to the data.

The additions Sunday continued a very pronounced decline in U.S. cases since almost 300,000 were reported for a single day in the first week of January.

There were just under 1,300 coronavirus-related deaths in the United States on Sunday, the data show, the lowest single-day toll since late December.

Although cases have seen a significant downward trend in recent weeks, deaths nationwide have continued to set records in recent days and weeks. The all-time high for deaths in a single day, more than 5,000, was set on Thursday, according to Johns Hopkins.

Since the start of the pandemic, there have been a little more than 27 million cases and about 463,500 related deaths in the United States, according to Johns Hopkins.

President Joe Biden and Vice President Kamala Harris will be part of a virtual tour Monday afternoon for a vaccination site at the football stadium in Glendale, a suburb of Phoenix, the White House said.

U.S. News // 1 hour ago
More than 4 years later, organizers of extremist Charlottesville rally face civil trial
Oct. 27 (UPI) -- The organizers behind the 2017 "Unite the Right" rally in Charlottesville, Va., are the focus of civil charges on Wednesday that they intentionally planned violence that killed a young woman and injured several people.

U.S. News // 10 hours ago
Judge says men shot by Kyle Rittenhouse can't be called 'victims' at trial
Oct. 26 (UPI) -- A judge on Tuesday said attorneys in the murder trial of Kyle Rittenhouse can refer to the three men the teen shot as "rioters," "looters" and "arsonists" but not "victims."

U.S. News // 13 hours ago
Pentagon official: ISIS-K could launch attack on U.S. within six months
Oct. 26 (UPI) -- Under Secretary of Defense for Policy Colin Kahl on Tuesday told lawmakers that the Islamic State-Khorasan Province, or ISIS-K, could be able to strike the United States within six to 12 months.
Advertisement