Markets rose as the Senate and House each passed a budget resolution Friday, beginning a reconciliation process that would allow Biden's relief plan to pass in the Senate with a simple majority and Treasury Secretary Janet Yellen said Sunday that passing the bill would help the United States reach full employment by 2022.

Additionally, the S&P's energy sector gained 4% as oil prices hit their highest level in more than a year. West Texas Intermediate crude climbed as much as 2% to $57.99 per barrel, while Brent Crude increased 2.11% to $60.60 per barrel.

Markets also reacted to a filing with the Securities and Exchange Commission showing that Tesla invested $1.5 billion in bitcoin and will soon accept the cryptocurrency as payment for some of its products.

Bitcoin's price climbed above $44,000 for an all-time high following the news and Tesla stock grew 1.31%. 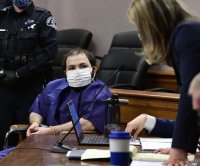 U.S. News // 9 hours ago
House passes two bills in response to Trump 2017 travel ban
April 21 (UPI) -- The House on Wednesday passed the NO BAN Act and the Access to Counsel Act, which both seek to combat former President Donald Trump's 2017 travel ban.