In one of final acts, Trump revokes no-lobbying rule for advisers

President Donald Trump boards Marine One on the South Lawn of the White House in Washington, D.C., on Wednesday as he prepares to leave for the final time as commander in chief. Photo by Al Drago/UPI | License Photo

Jan. 20 (UPI) -- In one of his final acts as commander in chief, President Donald Trump revoked one of the first orders he signed when he entered the office four years ago, the White House said Wednesday.

During his first week on the job in January 2017, Trump signed the "Ethics Commitments by Executive Branch Appointees," order. The rule required that his appointees promise not to engage in lobbying activities with respect to their official capacities.

The rule applied to all staffers and lasted for five years after they leave the White House. It included a lifetime ban against lobbying for any foreign government.

Trump signed the order on Tuesday.

Former President Bill Clinton revoked a similar order in the final days of his presidency.

President-elect Joe Biden is expected to sign a number of orders when he takes office on Wednesday to address priorities including COVID-19, the economy, climate change and immigration.

Biden is also expected to order that executive branch appointees sign an ethics pledge, barring them from acting in a personal interest and requiring them to uphold the independence of the Justice Department.

Trump leaves White House, Washington for final time as president Watch live: Joe Biden is sworn in as 46th president of the United States Trump grants Bannon, Broidy and 141 others clemency in final hours as president 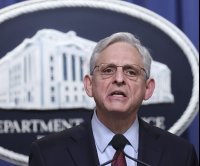 U.S. News // 34 minutes ago
Glencore agrees to pay $1.1B to settle bribery, price-fixing charges
May 25 (UPI) -- Glencore International has pleaded guilty to running a multinational bribery scheme and manipulating fuel oil prices in the United States and will pay some $1.1 billion in penalties.

U.S. News // 2 hours ago
U.S. sanctions Hamas official, facilitator network
May 24 (UPI) -- The United States blacklisted a Hamas finance official and an expansive network of facilitators and companies across the Middle East and North Africa that generate funds for the Palestinian militant organization.

U.S. News // 7 hours ago
Biden to lawmakers: 'It's time to act' on gun control after Texas school shooting
May 24 (UPI) -- President Joe Biden said "we have to act" to enact "common-sense" gun control legislation after a shooting at a Texas elementary school that killed 18 students and at least one adult on Tuesday.

U.S. News // 8 hours ago
More than 80 senators urge Biden to expedite Sweden, Finland NATO admission
May 24 (UPI) -- A group of more than 80 senators led by Sens. Thom Tills, R-N.C., and Jean Shaheen, D-N.H., on Tuesday sent a letter to President Joe Biden urging him to expedite the process of allowing Sweden and Finland to join NATO.