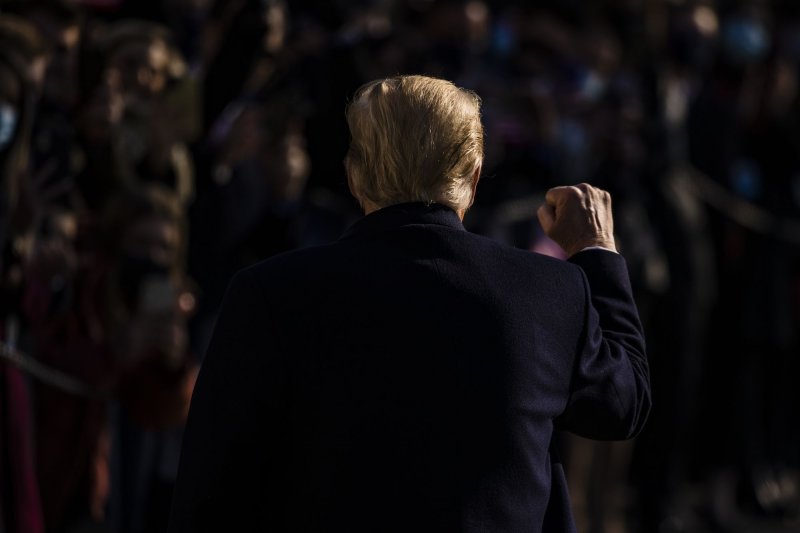 President Donald Trump ordered the formation of the 1776 Commission following a summer of protests against racial injustice. Photo by Samuel Corum/UPI | License Photo

Jan. 19 (UPI) -- A commission formed by President Donald Trump to promote "patriotic education" has released its report instructing educators to teach slavery in a broader context while grouping progressivism and identity politics with racism, communism and fascism as threats to U.S. principles.

The report published Monday was written by The President's Advisory 1776 Commission, which Trump announced the formation of in September against the backdrop of a summer of nationwide racial injustice protests following the death of George Floyd, a Black man who was killed in May by a White police officer.

In his announcement of the commission, Trump blamed the political left for having "warped, distorted and defiled the American story with deceptions, falsehood and lies" and that the "left-wing rioting and mayhem are the direct result of decades of left-wing indoctrination in our schools."

The report was released a little more than a month after Trump announced the commission's 18 conservative members, none of who is a historian, and amid uncertainty that they would even meet with weeks remaining before his administration would leave the White House.

The White House released the report on Monday describing it in a statement as "a definitive chronicle of the American founding" but was quickly chastised by historians and organizations.

The American Civil Liberties Union on Monday accused the Trump administration of attempting to rewrite history.

"America has existed longer with slavery than without, and reports like this make it clear that its legacy continues to manifest through systemic racism," it said in a statement.

And Thomas Sugrue, a professor of social cultural analysis and history at New York University, said the report could be boiled down to three arguments: that slavery was an aberration in U.S. history, that progressivism is un-American and that the recognition of group identities is racist.

"Its absurdities are compounded by its omissions," he continued via Twitter. "Where are the native Americans? No mention. How convenient."

In the 45-page report, the commission writes framing the founders as proponents of slavery is not only untrue but "has done enormous damage, especially in recent years, with a devastating effect on civic unity and social fabric" and that slavery must be viewed in a broader perspective, and not simply a U.S. institution.

It also lists progressivism and couples racism with identity politics as threats to U.S. principles, which also includes slavery, communism and fascism.

Under the racism and identity politics section, the commission said in the report that the Civil Rights Movement following the major legislative reforms concerning segregation in the 1960s "almost immediately turned to programs that ran counter to the lofty ideals of the founders."

To rewrite inequalities, affirmative action in the form of preferential treatment was employed, moving the country away from a system of equality to one of "explicit group privilege that, in the name of 'social justice' demands, equal results and explicitly sorts citizens into 'protected classes' based on race and other demographic," the report said.

Ibram X. Kendi, a professor in history at Boston University and the director of the Antiracism Center, rebuked the report as "the last great lie of the Trump administration."

"If we have commonly been given preferential treatment, then why do Black people remain on the lower and dying end of nearly every racial disparity," he asked via Twitter.

The report then calls for a renewed teaching of the history of the United States at the family dinner table, in grade school classrooms and university lecture halls, the latter of which it described as often being "hotbeds of anti-Americanism, libel and censorship that combine to generate in students and in the broader culture at the very least disdain and at worst outright hatred for this country."

Citizens for Responsibility and Ethics in Washington, a nonprofit and nonpartisan watchdog in the nation's capital, accused the Trump administration of racism with the report.

"The Trump administration is marking Martin Luther King Day by putting out a report that defends the Found Fathers for owning slaves and attacks the Civil Rights Movement," it said via Twitter.