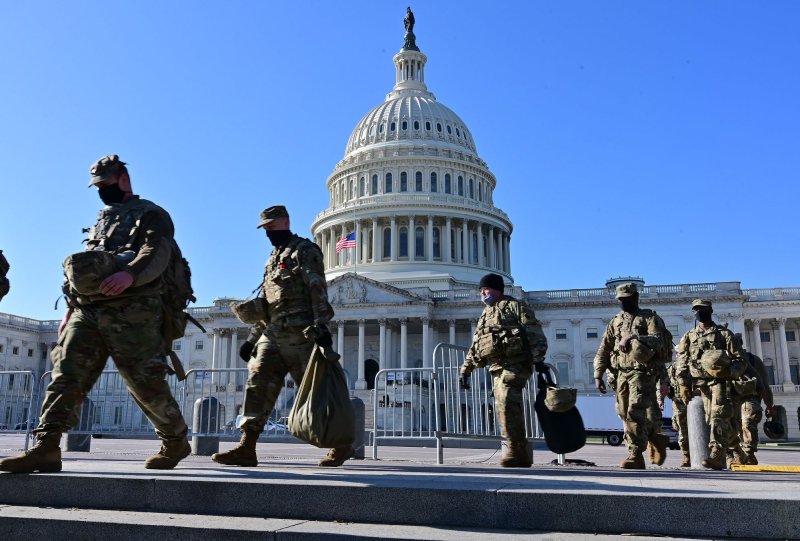 Jan. 14 (UPI) -- With days remaining before President-elect Joe Biden is inaugurated as the 46th president of the United States and in the wake of last week's siege on the U.S. Capitol building, federal law enforcement officials told Vice President Mike Thursday they are confident in the security for next week's inaugural but warned of potential threats.

Christopher Wray, director of the FBI, which has the lead role in domestic intelligence and counterterrorism for the inauguration, told Pence during a briefing on inauguration security at the Federal Management Agency that they have seen indications of possible threats.

"We are seeing an extensive amount of concerning online chatter about a number of events surrounding the inauguration," he said. "Right now, we're tracking calls for potential armed protests and activity leading up to the inauguration."

He said they are concerned about the potential for violence at "multiple protests and rallies planned here in D.C. and state Capitols around the country in the days to come."

On Jan. 6, supporters of President Donald Trump stormed the Capitol building, resulting in at least five deaths and law enforcement have been hunting down those involved.

More than 100 people have been arrested by the FBI in connection to last week's siege as agents continue to pursue "countless" other investigations, he said, adding that more than 200 suspects have been identified.

"We know who you are if you are out there and FBI agents are coming to find you," he said. "My advice to people who might engage in the type of activity we saw last week is stay home."

The Justice Department said in a statement Thursday that it has also made charges in about 80 cases and agents have arrested 34 suspects involved in the attack.

Officials have been fencing off the Capitol complex, including the Capitol building and the House and Senate, from the public ahead of Wednesday's event with U.S. Capitol Police warning on Thursday that those who attempt to breach it will be arrested.

"Anyone attempting to unlawfully gain access to the Capitol grounds by climbing a fence or any other unlawful means will be subject to an appropriate use of force and arrest," the statement said.

James Murray, director of the U.S. Secret Service, the lead security agency for the event, told the vice president that the security perimeter encompasses much of downtown Washington, D.C., and is reinforced by miles of hard fence and thousands of law enforcement and National Guard personnel.

Some 7,000 National Guard troops are on the Capitol grounds with 21,000 to be there for the inauguration, said Gen. Daniel Hokanson, chief of the National Guard Bureau, adding they are armed and equipped.

Washington, D.C., Mayor Muriel Bowser said during a press conference Wednesday that Jan. 6 siege of the Capitol building has changed how the traditional inauguration event will unfold, urging the public not to attend and participate virtually.

"We know that is the right choice and the best way to keep everyone safe," she said.

The Washington Metropolitan Area Transit Authority will be closing 11 stations from Friday and two more on Saturday for a total of 13 until Thursday to accommodate for the expanded security perimeter around the Capitol complex. Trains will bypass those stations, the Bowser's office said in a statement.

Road closures also went into effect from 8 a.m. Thursday around the so-called Capitol Green Zone that will remain in place until after the inauguration.

Biden's transition team said in a statement that the president-elect was briefed Wednesday by senior officials with the FBI and Secret Service, stating he will be receiving daily briefings on the security and operational preparations for the event.

"The President-elect and Vice President-elect are focused on safeguarding the security of the America people, our institutions and our democratic values," the transition team said "This will be a paramount priority in the days leading up to their inauguration, and throughout the Biden-Harris administration."

U.S. News // 1 hour ago
4 New York family members shot, killed in murder-suicide
Oct. 7 (UPI) -- An upstate New York man shot and killed his mother, father and wife before turning the gun on himself on Thursday in what authorities are calling a "family tragedy."

U.S. News // 6 hours ago
Justice Department sentences one, arrests another over election threats
Oct. 7 (UPI) -- A Nebraska man was sentenced to 18 months in prison for making threats against Colorado's Secretary of State Jena Griswold, while an Iowa man was charged with making threats against Arizona elections officials.
Advertisement