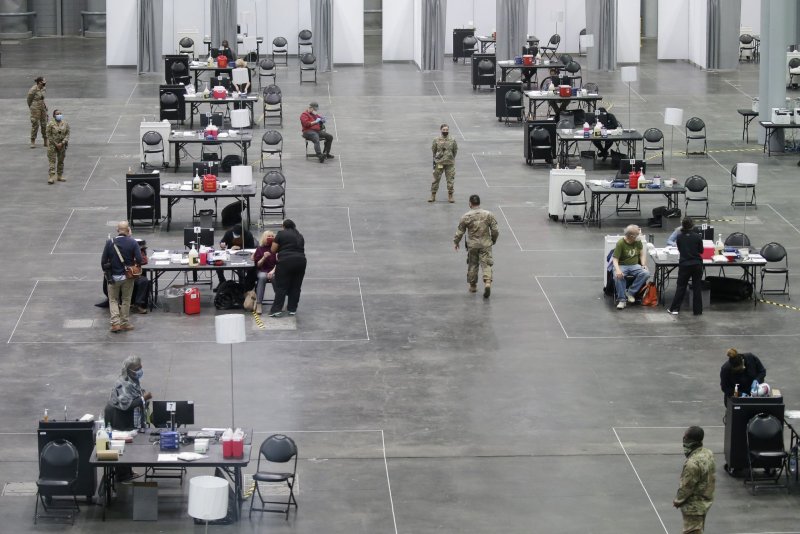 Vaccination stations are seen Wednesday at the Jacob K. Javits Convention Center in New York City. The convention center, which served as a large field hospital last spring in the early weeks of the pandemic, now is a vaccine distribution center. Photo by John Angelillo/UPI | License Photo

Jan. 14 (UPI) -- Another 4,000 people in the United States have died of COVID-19, according to updated data Thursday from Johns Hopkins University -- not too far off the record toll seen one day earlier.

There were about 3,960 coronavirus deaths on Wednesday. On Tuesday, 4,500 died, a single-day record, according to the research university's updated tracking data -- making the total over the past two days roughly 8,500.

Meanwhile, another 230,000 coronavirus cases were added nationwide on Wednesday, a slight increase from the day before.

Since the start of the pandemic, there have been 23.1 million coronavirus cases and about 385,200 deaths nationwide, according to Johns Hopkins.

The Centers for Disease Control and Prevention says that a little more than 10 million Americans have received at least one vaccine dose so far, and almost 30 million doses have been distributed to health centers nationwide.

President-elect Joe Biden will unveil multiple proposals on Thursday evening on various priorities of his incoming administration. Among them is his plan to get Americans vaccinated -- an effort that has sometimes been slow and met with criticism under the Trump administration.

Biden will also detail his plan to stimulate the U.S. economy, which may include a third direct aid payment to most Americans.

Other COVID-19 updates on Thursday: