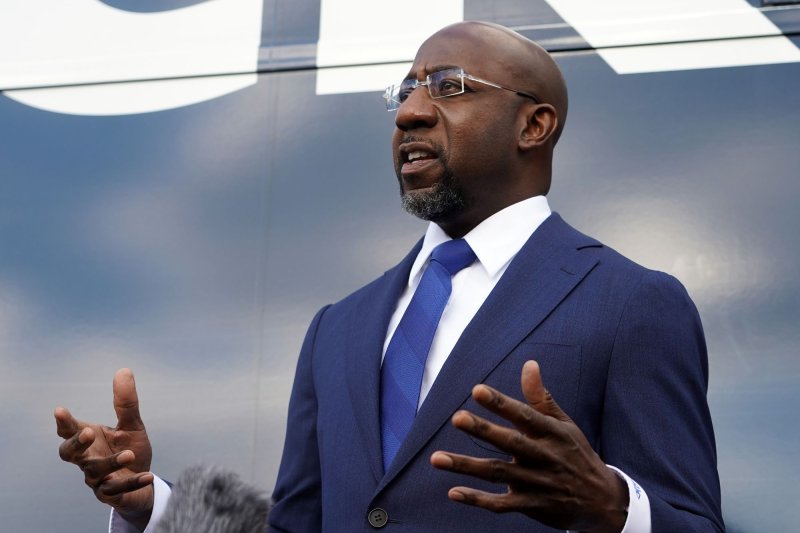 Jan. 6 (UPI) -- Democrats took control of the U.S. Senate -- and both chambers of Congress -- Wednesday after Jon Ossoff and Raphael Warnock were projected to win their runoff races in Georgia.

With 100% of precincts reporting Wednesday afternoon, Ossoff had 50.28% of the vote to incumbent Sen. David Perdue's 49.72, according to the Georgia secretary of state's website. Warnock had 50.7% of the vote in the special Senate race to Sen. Kelly Loeffler's 49.3%.

Both Ossoff and Warnock had enough of a lead to avoid an automatic recount.

With the victory, Warnock will become the first Black senator from Georgia.

Ossoff declared victory, saying "I will look forward to serving you in the United States with integrity, with humility, with honor."

Senate Democratic leader Chuck Schumer said he was ecstatic that Democrats would take the majority in the Senate.

The upper chamber will be divided 50-50 between Democrats and Republicans, but Vice President-elect Kamala Harris would break any tie votes in favor of the Democrats.

"Senators-elect Raphael Warnock and Jon Ossoff ran first-rate campaigns and will be outstanding senators for Georgia," Schumer said, promising that Democrats will deliver "much-needed help" to Americans with control of the House, Senate and presidency.

He said the outcome in Georgia would unleash "a tremendous amount of talent" within his party that has been stifled by GOP leadership.

Warnock, the pastor of the famous Ebenezer Baptist Church, claimed victory Tuesday in a live stream, stating his win should stand as inspiration for others who "are tying to grasp and grab hold to the American dream."

"I am honored by the faith that you have shown in me and I promise you this tonight: I am going to Senate to work for all of Georgia, no matter who you cast your vote for this election," he said.

"Last January, I endorsed my dear friend in his quest to serve. Soon, he will walk those august halls and cast votes as a leader with courage, justice and integrity," she said. "God bless you and keep you in your service to us all."

Polls closed Tuesday evening with more than 4.3 million votes cast, 3 million of which were cast early.

U.S. News // 13 hours ago
Oklahoma schedules 25 executions to begin in August
July 1 (UPI) -- An Oklahoma court on Friday scheduled the executions of 25 men over the next two and a half years, cases that the prisoners' lawyers say "exemplify systemic flaws" in the state's use of the death penalty.

U.S. News // 16 hours ago
Biden predicts states will ban women from traveling for abortion
July 1 (UPI) -- President Joe Biden on Friday predicted some states will try to prevent women from crossing state lines to seek an abortion but pledged to protect women's rights to travel to seek such services.

U.S. News // 18 hours ago
Iowa family sues amusement park in death of 11-year-old in 2021
July 1 (UPI) -- The family of an 11-year-old Iowa boy who died when an amusement park ride malfunctioned nearly a year ago filed a lawsuit against the park and its managers on Thursday.
Advertisement