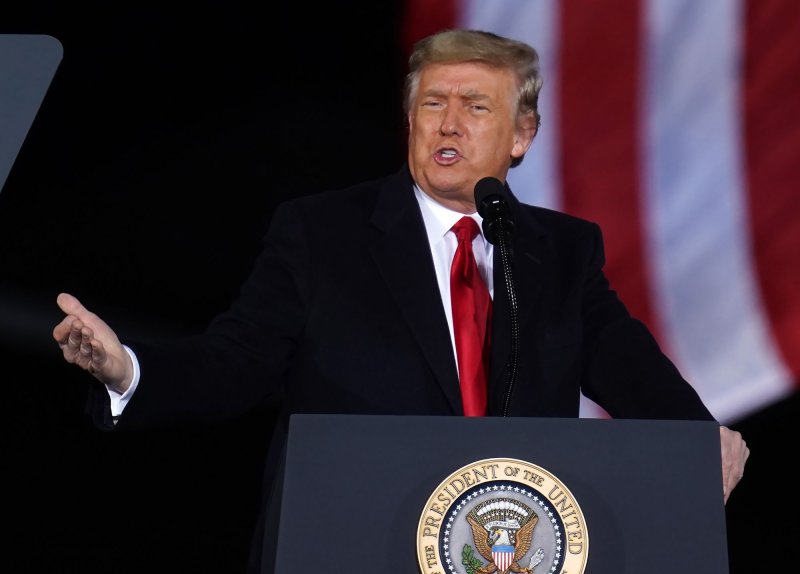 President Donald Trump speaks to his supporters at a rally for Georgia Senate candidates Kelly Loefler and David Perdue at the Dalton Regional Airport in Dalton, Georgia, on Monday. Georgia's senatorial runoff election January 5 will determine who controls the Senate. Photo by Tami Chappell/UPI | License Photo

Jan. 4 (UPI) -- The final day of campaigning for two U.S. Senate runoffs in Georgia brought out the big guns the eve of the election, with President Donald Trump, President-elect Biden and Vice President Pence all visiting the state for get-out-the-vote rallies.

More than 3 million early votes have been cast in the election that will determine which party controls the U.S. Senate.

Perdue is currently in quarantine after being exposed to COVID-19.

The rallies took place against the backdrop of controversy caused by the release of a recording of a phone call made by Trump to Georgia Secretary of State Brad Raffensperger, a Republican, asking him to "find" the votes necessary to overturn Joe Biden's victory in the state.

Trump held an evening rally at the Dalton Regional Airport in Dalton in the northwestern part of state, about 35 miles southeast of Chattanooga, Tenn.

"We've had two elections and I won both of them," Trump said, falsely disputing the certified results of the Nov. 3 election, which Biden won by around 7 million votes.

Trump told supporters he would fight to remain in the White House.

"If the liberal Democrats take the Senate and the White House -- and they're not taking this White House. We're gonna fight like hell," Trump said.

Biden was certified as the winner of the election in Georgia after a recount and audit. Biden won the state's 16 electoral votes, with 306 votes overall, surpassing the 270 needed to win. Trump garnered 232.

Monday night, Loeffler said in a statement that she will object to the Electoral College certification process, framing the decision as giving Americans "a platform in Congress."

"On Jan. 6, I will vote to give President Trump and the American people the fair hearing the deserve and support the objection to the Electoral College certification process," she said, without detailing specific issues.

Biden did not mention the revelations on Sunday that Trump had tried to pressure Georgia election officials to overturn the presidential election results.

Biden said electing Democrats would guarantee that the Senate under a new Democratic majority would revisit the $2,000 stimulus payments opposed by Senate Republicans.

"That money will go out the door immediately and help people who are in real trouble," Biden said. "Millions of people in this country are out of work through no fault of their own," he added.

Biden criticized Trump and his administration for a "God-awful start" on the plan to roll out COVID-19 vaccines.

"This president has spent more time whining and complaining than doing something about the problem," Biden said. "I don't know why he still wants the job. He doesn't want to do the work."

Pence made a final pitch for Perdue and Loeffler at a church about 50 miles south of Atlanta at noon.

During remarks at Rock Spring Church, Pence did not mention Trump's false allegations that votes had been stolen in Georgia, although rally participants chanted "Stop the Steal" during the vice president's speech.

On the recording, released Sunday by the The Washington Post and NBC News, Trump cited unfounded conspiracy theories and claims of fraud, threatening Raffensperger and state attorney Ryan Germany with potential legal and political consequences if they failed to throw the election to him.

Before that conversation, there had been 18 attempted calls from the White House to Raffensperger's office since the November election, CNN reported.

Ossoff and Warnock seized on Trump's comments in making their final pitches to Georgians.

Perdue, however, told Fox News on Monday that he "didn't hear anything in that tape that the president hasn't already said for weeks now," echoing unsubstantiated allegations that "something untoward happened here in Georgia" despite Biden's win withstanding multiple recounts and audits.

Warnock, who is facing Loeffler on Tuesday, tweeted, "Georgia elected [Biden and Kamala Harris]. That's a fact. [Loeffler] has a responsibility to speak out against these unsubstantiated claims of fraud, defend Georgia's elections, and to put Georgia ahead of herself. But she hasn't. And she never will."

In a visit to Georgia on Sunday, Harris accused the president of a "bald-faced, bold abuse of power" in a bid to reverse the presidential election results.

U.S. News // 9 hours ago
Biden promises every adult can be vaccinated by end of May
March 2 (UPI) -- President Joe Biden said Tuesday there will be enough COVID-19 vaccines for every adult in the United States to be fully vaccinated by the end of May, two months sooner than previously expected.

U.S. News // 11 hours ago
Wray: Social media was one of the catalysts for Jan. 6 attack
March 2 (UPI) -- The head of the Federal Bureau of Investigation appeared in the Senate on Tuesday to testify about the Jan. 6 attack on the U.S. Capitol -- six months after he warned Congress about rising domestic extremism.