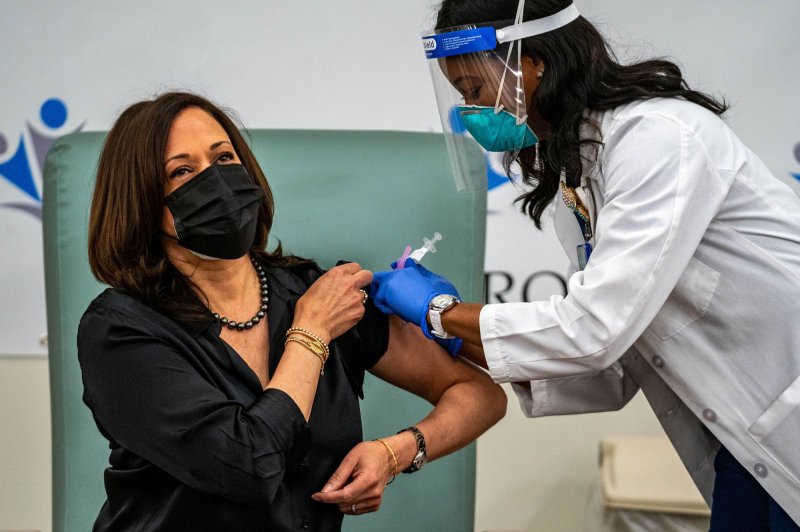 Vice President-elect Kamala Harris speaks to reporters Tuesday after she received Moderna's COVID-19 vaccine at United Medical Center in Washington, D.C. Afterward, she urged everyone to get vaccinated when it becomes available. Photo by Ken Cedeno/UPI | License Photo

Harris received the first of two doses of the "messenger RNA" vaccine developed by Moderna in front of cameras at Washington's United Medical Center, as part of a collective effort by political leaders to build confidence for the vaccines among skeptical Americans.

"That was easy," she exclaimed after receiving the shot.

"I want to encourage everyone to get the vaccine. This is literally about saving lives. I trust the scientists -- and it is the scientists who created and approved this vaccine. So I urge everyone, when it is your turn, get vaccinated."

RELATED So far, gov't far short of goal to give COVID-19 vaccine to 20 million in U.S.

Harris particularly encouraged communities of color, which have been severely sickened by the coronavirus, to put aside fears or suspicions and get vaccinated.

Two mRNA vaccines have so far been approved for use in the United States -- Moderna's and another from Pfizer-BioNTech, both of which have proven to be about 95% effective with only mild side effects.

RELATED Fauci: Santa got vaccine, 'good to go' for Christmas

A number of government leaders and lawmakers have also received an initial dose in recent weeks.

President-elect Joe Biden was inoculated last week. He and Harris staggered their vaccinations on advice from medical experts.

Senate Republican leader Mitch McConnell, House Speaker Nancy Pelosi and other members of Congress have also received their vaccinations. President Donald Trump has not yet received the vaccine, most likely because health advice recommends that anyone who's been treated for COVID-19 should wait for 90 days before they are vaccinated.

U.S. News // 12 hours ago
Trump declares political journey is 'far from over' to close CPAC 2021
Feb. 28 (UPI) -- Former President Donald Trump hinted at another run for president in 2024 in his first speech since leaving office to close out the Conservative Political Action Conference on Sunday from Orlando, Fla.

U.S. News // 11 hours ago
Shot of snow to deliver slippery spots, cold for Plains, Midwest
Feb. 28 (UPI) -- A swath of snow is forecast to streak across the northern tier of the country, opening the door for a blast of colder air to filter in from Canada.

U.S. News // 13 hours ago
Cuomo 'truly sorry' if words 'misinterpreted,' wants investigation
Feb. 28 (UPI) -- New York Gov. Andrew Cuomo was "truly sorry" if "some of the things I have said have been misinterpreted as an unwanted flirtation." He called for an independent investigation of the allegations.

U.S. News // 18 hours ago
Heavy rain, thunderstorms to threaten the South into midweek
Feb. 28 (UPI) -- In the wake of bitterly cold air in mid-February across the South, milder air and rounds of rainfall are now bringing along a new set of hazardous weather conditions. As the calendar flips into March, the concern for flooding rainfall and locally severe thunderstorms is on the agenda for millions of Americans.