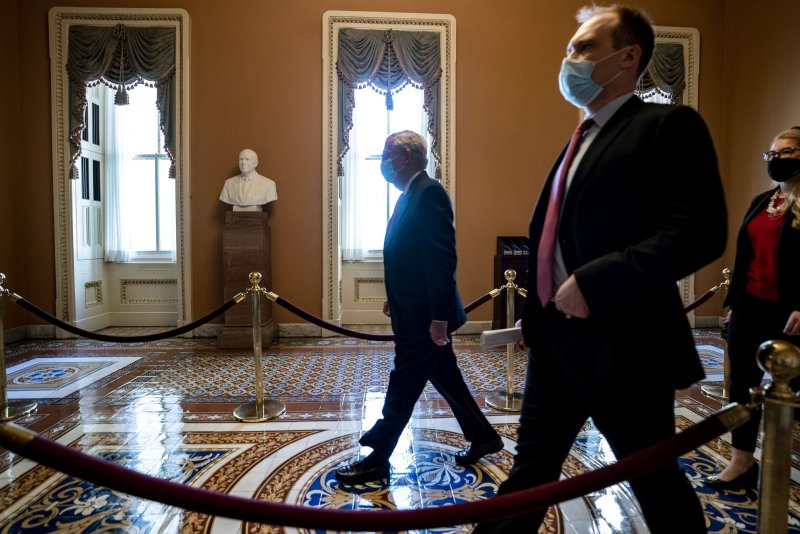 Dec. 23 (UPI) -- After a surprise move by President Donald Trump to wade into attack mode for the new COVID-19 relief package, which aims to send direct payments to Americans in the coming days, it's unclear Wednesday what the next step in the process will be.

Trump assailed the relief bill late on Tuesday, denouncing the $600 stimulus payments for most Americans as insufficient and attacking parts of the attached $1.4 trillion omnibus spending bill as excessive and "wasteful."

Democrats, including House Speaker Nancy Pelosi and Senate minority leader Charles Schumer, have been quick to welcome larger stimulus payments -- which Trump floated at $2,000 per person and $4,000 per couple.

Republicans, however, have largely been silent since Trump's surprise video message.

"He stayed out of these negotiations for weeks, he did not press for a bigger package in the final days before it was enacted, and once the bill has passed and the entire Congress has gone home, he announced he wanted a bigger bill than Republicans were willing to accept," Coons told NPR.

Coons said Senate Democrats should "call Trump's bluff" and agree to a larger stimulus amount by unanimous consent, effectively daring Republicans to do the same.

RELATED Trump calls COVID-19 relief bill 'a disgrace,' says he may not sign it

Democrats say they will attempt to make the change on Thursday, but it's unclear exactly what Republicans' line on Trump's sudden dissent will be. Trump didn't expressly say he would veto the bill, but it passed both chambers of Congress with overwhelming and veto-proof majorities.

If the bill arrived on Trump's desk and he did nothing, it could still become law after 10 days.

Also, if Trump doesn't sign the bill by Monday at midnight, when the latest stopgap funding measure expires, the federal government would shut down and some pandemic-related unemployment benefits would expire.

The latest political delay is not likely to go over well with millions of Americans who are facing great financial hardship due to the coronavirus pandemic and have been counting on some federal aid during the holidays.

The New York Times reported that Trump wanted to press for larger stimulus payments before the deal was agreed to, but was discouraged by his advisers to do so.

Sen. Bernie Sanders, I-Vt., Sen. Josh Hawley, R-Mo., and others in the upper chamber have been lobbying for greater direct cash payments for weeks.

"That's great! I first introduced a bill to provide a $2,000 direct payment with [Sen. Kamala Harris] and [Sen. Ed Markey] 7 months ago," Sanders tweeted late Tuesday. "Now, Mr. President, get [Senate Republican leder] Mitch McConnell and your Republican friends to stop opposing it and we can provide working class Americans with $2,000. Let's do it."

"Trump told me multiple times he wanted higher payments to workers. That's what we were fighting for," Hawley added in a tweet.

"Trump is right -- workers deserve much more than $600, as I have repeatedly said and fought for," he wrote in another. "And there's obviously plenty of [money] to do it -- look at what Congress threw away on corporate giveaways and foreign buyouts. Let's get it done."

"Hey Senate Republicans, remember when you rejected bigger checks on Friday?" Schumer asked in a tweet, saying that he supports a larger payment for Americans.

"I'm in. Whaddya say, Mitch? Let's not get bogged down with ideological offsets and unrelated items and just DO THIS! The American people deserve it."

Rep. Ted Lieu, D-Calif., directed his frustration at Treasury Secretary Steve Mnuchin, who represented Trump in negotiations for the relief deal -- and said this week Americans should start receiving stimulus payments in a matter of days.

"You failed the American people," Lieu told Mnuchin in tweet. "You hid that [Trump] wanted $2,000 stimulus checks. You are not the president. You cannot substitute your own views. Your job is to negotiate on behalf of [the president], not mislead Congress about Trump's views."

CNN reported Wednesday that Republican lawmakers were given no warning that Trump was going to attack the relief bill, and many were caught off guard. The report cited a GOP aide who said party officials had assumed Mnuchin was representing the president's views.

Mnuchin had not publicly responded to Trump's position or the criticisms by early Wednesday.