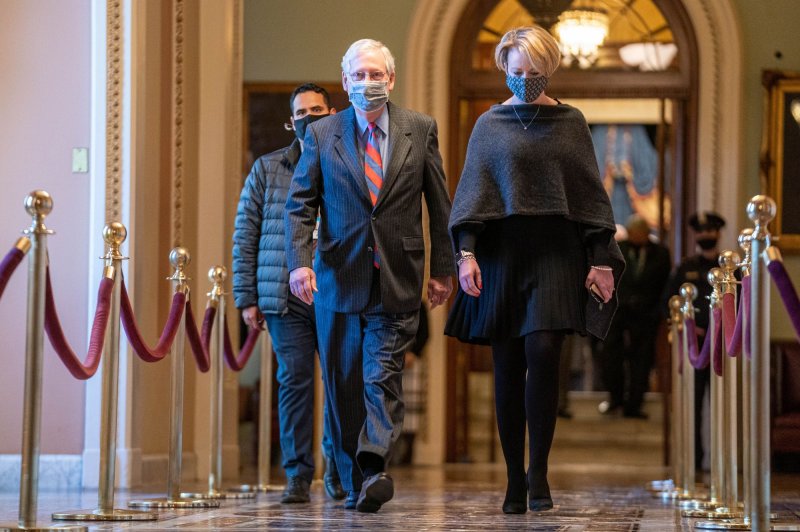 Senate Republican leader Mitch McConnell walks to his office from the Senate floor on Thursday at the U.S. Capitol in Washington, D.C. Photo by Ken Cedeno/UPI | License Photo

Lawmakers agreed to the continuing resolution after it became clear that negotiations on a bill to fund the government through the end of the fiscal year along with a new coronavirus relief package were stalled.

"The American people urgently need coronavirus relief and this short stopgap bill will allow bipartisan, bicameral negotiators to complete their work on this important issue," she said. "I look forward to swiftly passing omnibus appropriations and coronavirus relief legislation through the House as soon as possible."

U.S. lawmakers were attempting to combine a new coronavirus relief bill with a spending measure avoiding a pending government shutdown. The stopgap means work will likely spill over into the weekend.

Congressional negotiators from both parties say they hope to attach a pandemic relief bill worth nearly $1 trillion onto a $1.4 trillion measure to fund federal government operations through September.

A stopgap measure that was passed last week was set to expire at midnight, putting pressure on negotiators to iron out long-held differences on COVID-19 relief and pass both bills before Friday is over. They now have until Sunday to make a deal.

Some Senate Republicans, however, said a brief government shutdown during the weekend may be necessary if the talks need to continue past the deadline.

"Government shutdowns are never good," Sen. John Thune, R-S.D., told reporters Thursday. "If it's for a very short amount of time on a weekend hopefully it's not going to be something that would be all that harmful."

"The Senate's not going anywhere until we have COVID relief out the door," he said Thursday on the Senate floor. "We're staying right here until COVID relief is out the door. In the meantime, we're going to stay productive while these negotiations are going on."

It appeared a deal on a proposed $900 billion relief bill had been reached on Wednesday, but last-minute disagreements stalled progress.

One of the chief sticking points is a demand by Sen. Patrick Toomey, R-Pa., and other Republicans to limit the ability of the Federal Reserve Bank and the Treasury Department to issue emergency pandemic loans.

The issue was a "bright red line" for him in negotiations, he told The Washington Post.

Democrats, however, opposed the idea because it would be an obstacle for the incoming administration of President-elect Joe Biden.

By late Thursday, the stimulus bill had called for a direct stimulus payment of $600 for millions of Americans, additional unemployment benefits of $300 per week for 10 weeks, about $325 billion for small businesses and funding for transportation, vaccine distribution and schools, Politico reported.

U.S. News // 6 hours ago
Glencore agrees to pay $1.1B to settle bribery, price-fixing charges
May 25 (UPI) -- Glencore International has pleaded guilty to running a multinational bribery scheme and manipulating fuel oil prices in the United States and will pay some $1.1 billion in penalties. 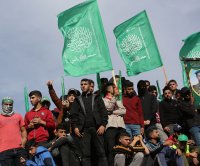 U.S. News // 8 hours ago
U.S. sanctions Hamas official, facilitator network
May 24 (UPI) -- The United States blacklisted a Hamas finance official and an expansive network of facilitators and companies across the Middle East and North Africa that generate funds for the Palestinian militant organization.

U.S. News // 13 hours ago
Biden to lawmakers: 'It's time to act' on gun control after Texas school shooting
May 24 (UPI) -- President Joe Biden called for gun control legislation following the mass shooting at a Texas elementary school that left 19 students and two adults dead on Tuesday.