McConnell recognizes Biden as president-elect after weeks of silence

Senate Majority Leader Mitch McConnell, R-Ky., removes his face mask as he arrives for a news conference Tuesday with other Senate Republicans at the U.S. Capitol in Washington, D.C. Pool photo by Tom Brenner/UPI | License Photo

Dec. 15 (UPI) -- Sen. Mitch McConnell, the Republican leader of the Senate and ardent supporter of President Donald Trump's, acknowledged for the first time Tuesday that President-elect Joe Biden is the winner of the 2020 election.

Numerous Republicans in Congress have so far refused to recognize Biden as the incoming president, by either flatly rejecting the notion or remaining silent on the issue. McConnell, as Senate Republican leader, has been particularly conspicuous in his silence.

Tuesday, however, he finally broke the silence after the Electoral College formally cast the votes to elect Biden president and Sen. Kamala Harris vice president on Monday.

"Many millions of us had hoped the presidential election would yield a different result. But our system of government has processes that determine who will be sworn in on Jan. 20."

As expected, Biden received 306 electoral votes Monday in the Electoral College vote, which had until this year been largely an unnoticed pro forma step in the election process. Trump has repeatedly claimed the election was "rigged" and that millions of illegal votes were counted for Biden, among a wide array of varying conspiracy theories to explain his defeat. He has not yet conceded.

Before acknowledging Biden and Harris, McConnell spoke for more than eight minutes about accomplishments and lauded the efforts of Trump's administration over the last four years.

Earlier Tuesday, Russian President Vladimir Putin also finally acknowledged Biden as the next president after weeks of silence. He was one of a few world leaders who'd held off on congratulating Biden during Trump's continued legal resistance.

Putin sent word of his congratulations to the president-elect in a telegram, his office said on Tuesday.

"In his telegram, Putin wished every success to the president-elect and expressed confidence that Russia and the U.S., who bear special responsibility for global security and stability, could, despite their differences, help solve many problems and challenges that the world now faces," the Kremlin said in a statement.

"For my part, I am ready to cooperate and maintain contact with you."

In a speech Tuesday night after the Electoral College voting, Biden called on Trump to respect the results.

"At the time [in 2016], President Trump called the Electoral College tally a 'landslide,'" Biden, who was the nation's 47th vice president under President Barack Obama, said. "By his own standards these numbers represented a clear victory then, and I respectfully suggest they do so now."

Chinese President Xi Jinping had also waited for weeks before he acknowledged Biden's victory -- and Brazilian President Jair Bolsonaro, a vocal supporter of Trump's who's often called the "Trump of the Tropics," still has not recognized the election results. 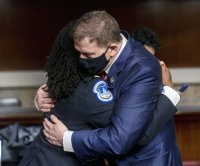