The bill, which attempts to address the issue of transgender women in sports, clarifies that Title IX compliance should be "determined on the basis of biological sex as determined at birth by a physician."

Title IX outlaws discrimination based on sex at any school receiving federal funding. The law has been widely used in promoting the growth of women's collegiate sports, placing them on equal footing as men's sports.

"Title IX is being weakened by some states who are misinterpreting Title IX, creating uncertainty, undue hardship and lost opportunities for female athletes," Gabbard, who did not run for re-election to her House seat, said in a statement. "Our legislation protects Title IX's original intent which was based on the general biological distinction between men and women athletes based on sex."

Mullin said in his statement that allowing "biological males" to compete in women's sports diminishes opportunities and a "level playing field" for all women.

"As the father of three girls involved in athletics, I want them to be able to compete on a level playing field," he said. "I am proud to lead this bill that will safeguard the integrity of women's sports and ensure female athletes can compete fairly."

Delaware's Sarah McBride, who recently made history as the first transgender woman to win an election as a state senator, mocked Gabbard for being connected with the bill.

"Usually, when I've criticized Tulsi Gabbard in the past for her heinous record and positions, I've had her fans bombard me with nonsense," Clymer said. "It'll be interesting to see how quiet they remain over this."

U.S. News // 4 hours ago
Tennessee man pleads guilty in Jan. 6 Capitol attack
June 22 (UPI) -- A Tennessee man pleaded guilty Tuesday to demonstrating inside the U.S. Capitol during the Jan. 6 attack on the building.

U.S. News // 4 hours ago
Senate holds rare hearing on D.C. statehood
June 22 (UPI) -- The Senate held a rare hearing to evaluate statehood for Washington, D.C., with supporters pushing for voting rights and opponents questioning the legality of creating a new state without a constitutional amendment.

U.S. News // 7 hours ago
Lucid Motors announces NYC offices, arrival of new vehicle
June 22 (UPI) -- Lucid Motors, the Silicon Valley electric vehicle startup that holds the distinction of having the longest range of any other EV, announced the opening of a new flagship office in New York City Monday.

U.S. News // 8 hours ago
McDonald's to launch first U.S. rewards program this summer
June 22 (UPI) -- McDonald's announced Tuesday that it will unveil the first U.S. loyalty program in its history this summer.

U.S. News // 9 hours ago
Deaths at U.S. nursing homes surged by 170,000 in 2020, watchdog report says
June 22 (UPI) -- Deaths among Medicare patients in nursing homes last year surged by more than 30%, with two pronounced spikes at different times of the year, according to a report by the federal health department's inspector general. 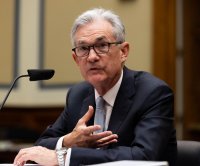