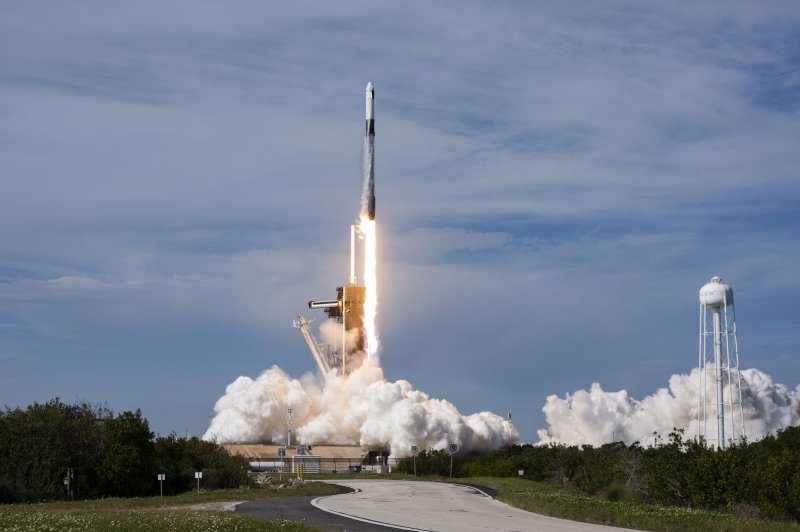 A SpaceX Falcon 9 rocket launches a Dragon 2 spacecraft to the International Space Station from Launch Complex 39A at 11:17 a.m. Sunday from the Kennedy Space Center. Photo by Joe Marino/UPI | License Photo

Dec. 6 (UPI) -- SpaceX's Falcon 9 rocket, with 1.7 million pounds of thrust, lifted off at 11:17 a.m. EST Sunday on clear skies from Complex 39A at Kennedy Space Center in Florida with cargo headed to the International Space Station that include seven astronauts.

The private company's launch was scheduled for Saturday morning, but was delayed because of poor weather in the area designated for recovery of the first-stage booster. The booster, which launched its fourth payload into space, separated at 2 minutes, 45 seconds and six minutes later landed on the drone barge called Of Course I Still Love You in the Atlantic Ocean.

The flight was SpaceX's first upgraded cargo Dragon capsule. At 1:30 p.m. EST Monday, it is scheduled to join the Crew Dragon, marking the first time two Dragon capsules are docked there. In all there will be seven vehicles, including two Soyuz.

"It's a really big vehicle and takes a lot of cargo up. It has 20% more volume than the previous version," Sarah Walker, SpaceX director of Dragon mission management, said at a press conference Friday.

The 6,400 pounds of cargo include simulated heart tissue for a medical experiment, a holiday meal and the first privately owned airlock.

The heart experiment includes 192 chunks of tissue engineered from blood cells of six people -- three men and three women -- that will be kept healthy in a small laboratory.

Other projects on board the mission, SpaceX CRS-21, include research on microbes that could be used to break down rocky material on asteroids; a tool being tested for quick and accurate blood analysis in microgravity; and another human tissue study regarding the effects of spaceflight on post-traumatic osteoarthritis and bone loss.

Also aboard the SpaceX's storage trunk are a Bishop Airlock, built by Pittsburgh-based space company Nanoracks. Astronauts plan to install the airlock on the exterior of the space station, where it will release science experiments and small satellites into space.

NASA says the private airlock just for science experiments and small satellites will allow more efficient use of the station's airlocks and allow for more commercial activity.

U.S. News // 1 hour ago
Storm with high winds, colder air to blast across Midwest, Northeast
More than 125 million people from the Midwest to the Northeast could face disruptive wind gusts from a powerful storm system from Tuesday to Wednesday.

U.S. News // 1 hour ago
Severe weather to threaten 25 million from Texas to Illinois
Approximately 25 million people in the south-central United States will be at risk for severe thunderstorms on Tuesday alone.

U.S. News // 1 day ago
Pentagon condemns rocket strikes near U.S. base in Syria
Nov. 26 (UPI) -- The Pentagon has condemned a rocket attack that targeted a U.S. military base in northeastern Syria on Friday night.

U.S. News // 1 day ago
Train of storms to bring disruptive weather for the West into December
A train of storms will roll across the northwestern United States through much of the upcoming week, ushering in widespread rain and snow, forecasters said Saturday.
Advertisement