Moderna said Wednesday it plans to begin testing its COVID-19 on children between the ages of 12 and 17. File Photo by CJ Gunther/EPA-EFE

Notes listed on clinicaltrials.gov said the study will include 3,000 participants -- half of whom will receive the vaccine, while the other half receive a placebo -- in order to "evaluate the safety" of a single-dose level of the vaccine administered to "an adolescent population."

Both the vaccine and placebo will be administered in two doses 28 days apart.

The web page for the study said it is not yet recruiting candidates and Moderna spokeswoman Colleen Hussey told The New York Times the company was not certain when testing sites would be listed or begin accepting volunteers.

On Monday, Moderna said it would seek an emergency use authorization from the U.S. Food and Drug Administration after further clinical trials of its vaccine on adults found it was 94% effective.

The company's vaccine has not been tested on children or pregnant women.

Fellow drugmaker Pfizer began testing its vaccine on children as young as 12 in October and AstraZeneca has begun trials on children but solely outside of the United States.

Pfizer and BioNTech have also applied for an emergency use authorization and the FDA's Vaccines and Related Biological Products Advisory Committee plans to meet Dec. 10 to review the vaccine and recommend whether it should be cleared. 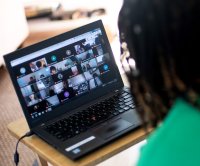