Archbishop Wilton Gregory, shown speaking as president of the U.S. Conference of Catholic Bishops on June 19, 2003, will be formally named as a cardinal on Saturday. Photo by Bill Greenblatt/UPI | License Photo

Nov. 27 (UPI) -- Archbishop Wilton Gregory will be the first Black American to hold the rank of cardinal in the Roman Catholic Church on Saturday, when he officially becomes a member of the College of Cardinals.

Gregory is currently self-quarantining in Rome as he waits for the induction. The archbishop, known for his outspokenness on many issues challenging the church, Gregory said he was surprised about the promotion.

He made welcoming diversity to the church, including members of the LGBTQ community, one of his keystone missions.

Gregory, the archbishop of Washington, D.C., said that while he doesn't share President-elect Joe Biden's view on abortion, he hopes to build a good relationship with him. Biden is the second Catholic elected as president.

"I want to begin whatever conversations ensue in a positive vein, rather than in an adversarial mode," Gregory said.

Gregory made headlines this summer when federal agents forced demonstrators to disperse outside the White House before President Donald Trump's photo opportunity at St. John's Episcopal Church. The Knights of Columbus hosted Trump the next day at the St. John Paul II Shrine in northern D.C.

Gregory said Trump's action against protesters was an effort to "to silence, scatter or intimidate" the crowd. His words for the Catholic Knights of Columbus was even sharper.

"I find it baffling and reprehensible that any Catholic facility would allow itself to be so egregiously misused and manipulated in a fashion that violates our religious principles," Gregory said of the organization.

Saturday's induction, called a consistory, will be unique for several reasons. Two of the appointees, Cornelius Sim of Brunei and Jose Fuerte Advincula of the Philippines, will not be able to attend because of COVID-19 travel restrictions. They will participate via a special live stream.

A total of 13 men will become cardinals on Saturday. 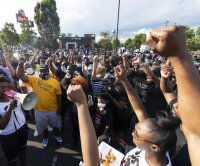 U.S. News // 28 minutes ago
Atlanta officer fired over shooting death of Rayshard Brooks reinstated, says board
May 6 (UPI) -- The Atlanta police officer charged with murder over the shooting death of a Black man last summer has been reinstated to the force though he will remain on administrative leave.