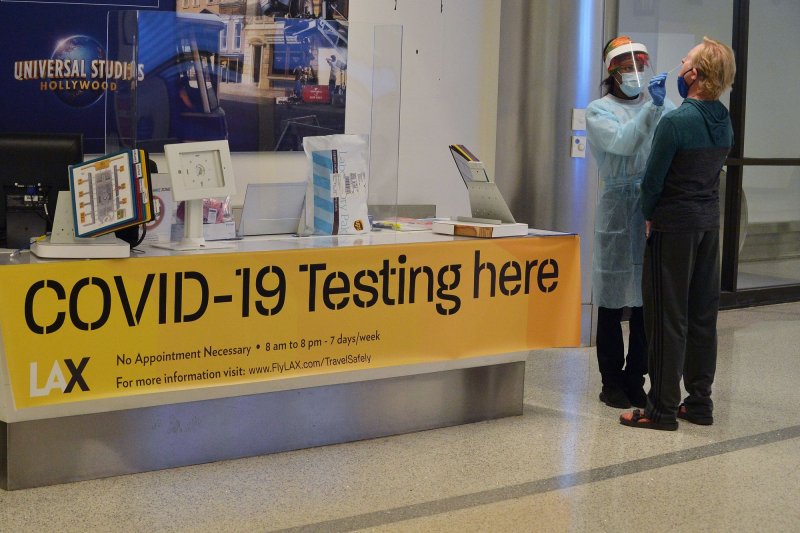 A traveler is tested for the coronavirus at Los Angeles International Airport on Wednesday in Los Angeles, Calif. The airport has begun giving molecular tests this week and has plans to quickly expand the program. Travelers can buy a test for $150. Photo by Jim Ruymen/UPI | License Photo

Nov. 19 (UPI) -- Coronavirus cases in the United States have risen by the second-highest one-day count to date, according to updated data from Johns Hopkins University.

The data showed Thursday that there were about 170,200 COVID-19 cases on Wednesday. That mark is second only to the 177,000 added last Friday.

Since the start of the pandemic, there have been 11.54 million cases and 250,100 deaths nationwide, according to Johns Hopkins.

The national death toll could reach 300,000 by the end of the year, according to the former acting director of the Centers for Disease Control and Prevention.

Dr. Richard Besser, now the president and CEO of the Robert Wood Johnson Foundation, told ABC's Good Morning America Thursday that "we're losing more than a thousand people a day, and the numbers are rising."

"I worry ... that if we don't change what we're doing, we're going to be having a conversation before the end of the year about 300,000 people," he added.

U.S. hospitalizations increased by 2,500 and are now just short of 80,000, according to the COVID Tracking Project.

California Gov. Gavin Newsom on Thursday announced a limited stay at home order for all counties in the most restrictive "purple tier" of the state's mitigation system, closing all non-essential businesses and prohibiting personal gatherings between 10 p.m. and 5 a.m. beginning Saturday.

"The virus is spreading at a pace we haven't seen since the start of this pandemic and the next several days and weeks will be critical to stop the surge. We are sounding the alarm," Newsom said. "It is crucial that we act to decrease transmission and slow hospitalizations before the death count surges. We've done it before and we must do it again."

The announcement came after Newsom placed 94% of California's population in the most restrictive tier Monday.

In Arizona, Gov. Doug Ducey on Wednesday declined to order a statewide requirement that residents wear masks in public.

Ducey, a Republican, observed a moment of silence for more than 6,000 Arizona patients who have died so far, and announced $25 million in funding to bolster hospital staffing. But, he doesn't think a mask rule is necessary.

"Nearly 90% of the state is under a local mask mandate, and statewide masks are required in restaurants, movie theaters, gyms and more," he told reporters.

U.S. News // 22 hours ago
Judge allows family to view videos of Andrew Brown Jr. shooting
May 7 (UPI) -- A North Carolina judge has ruled to allow the family of Andrew Brown Jr., to view the body-worn camera footage of the police shooting of the man.