A young child looks through the border fence into the United States at Playas de Tijuana in Tijuana, Mexico, on November 28, 2018. File Photo by Ariana Drehsler/UPI | License Photo

Nov. 19 (UPI) -- A federal judge has ordered the Trump administration to stop its policy of immediately deporting migrant children who cross the U.S.-Mexico border without a parent, over fears they could spread COVID-19.

Under the policy, the department cites the Public Health Service Act to impose stricter border controls, which allows them to send back thousands of unaccompanied children -- defying court-mandated protections.

The government said it has expelled more than 200,000 undocumented migrants since the policy began in March.

The department has argued that the expulsions are needed to protect border agents and the American public, arguing that holding unaccompanied children would spawn new COVID-19 outbreaks.

In his order, Sullivan ruled that the department must immediately halt those expulsions and denied a request that the order be delayed while the matter is litigated.

"The court agrees that the undisputed authority granted in [federal law] is extraordinary and that the COVID-19 pandemic is unprecedented," Sullivan wrote. "But that is entirely distinguishable from whether or not [the law] authorizes the government to expel persons."

The American Civil Liberties Union, which sought the injunction on behalf of a migrant child, called the injunction a "critical step" in stopping the administration's "unprecedented and illegal attempt to expel children under the thin guise of public health."

"The administration's order has already allowed for the rapid expulsion of more than 13,000 children in need of protection, who were legally entitled to apply for asylum," ACLU attorney Lee Gelernt, the lead attorney in the case, said.

U.S. News // 5 hours ago
Justices debate Spanish vs. California law in Nazi-looted art case
WASHINGTON, Jan. 18 (UPI) -- The fate of a Pissarro painting estimated at $40 million rests in the hands of the Supreme Court after justices heard oral arguments Tuesday in a long-running case concerning ownership of the painting.

U.S. News // 16 hours ago
Senators clash as debate picks up over stalled voting rights bills
Jan. 18 (UPI) -- Senate Democrats and Republican clashed on the House floor Tuesday, as they argued over the possibility of amending rules surrounding the use of the filibuster, to block debate on two pieces of voting rights legislation. 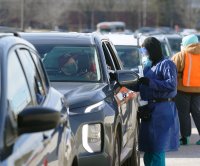 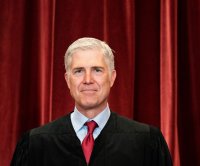