Gallup: Support in U.S. for death penalty at lowest point in decades

Support is most common among non-Hispanic Whites (61%), while fewer than half (46%) of non-Whites favor the practice, Thursday's survey shows. File Photo by Doug Smith/Florida Department of Corrections/Wikimedia Commons

Nov. 19 (UPI) -- Support in the United States for capital punishment keeps declining and more Americans now oppose the death penalty than at any point in more than a half-century, according to a Gallup survey Thursday.

The survey shows that a majority of Americans still favor executions for criminals convicted of murder, but the share (55%) is at its lowest point since 1972, when 50% said they supported the practice.

The share of Americans (43%) who said they oppose the death penalty, however, is lower now than at any point since the late 1960s, according to the poll.

RELATED U.S. set to carry out 8th federal execution of 2020 on Thursday

"As public opinion has trended away from favoring the death penalty, state laws have also changed," Gallup wrote. "Twenty-two states do not allow the death penalty by law, with nearly half of those having enacted their current laws in the past two decades.

"Three additional states -- California, Oregon and Pennsylvania -- have laws permitting the death penalty, but their governors have issued moratoriums on its use."

Politically, Republicans comprise the greatest share (80%) of supporters over the last four years. Support is far lower among Democrats (39%) and independents (54%).

Support is most common among non-Hispanic Whites (61%), while fewer than half (46%) of non-Whites favor the practice, the survey shows.

The Gallup survey was published on the same day the federal government is set to carry out its eighth execution of 2020. Federal executions resumed in July for the first time in 17 years.

Gallup polled more than 1,000 U.S. adults living in every state and Washington, D.C., for the survey, which has a margin of error of 4 points. 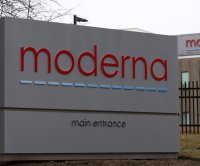 U.S. News // 7 hours ago
Moderna to begin vaccine trials on children
Dec. 2 (UPI) -- Moderna said Wednesday it plans to begin testing its COVID-19 vaccine on children between the ages of 12 and 17.