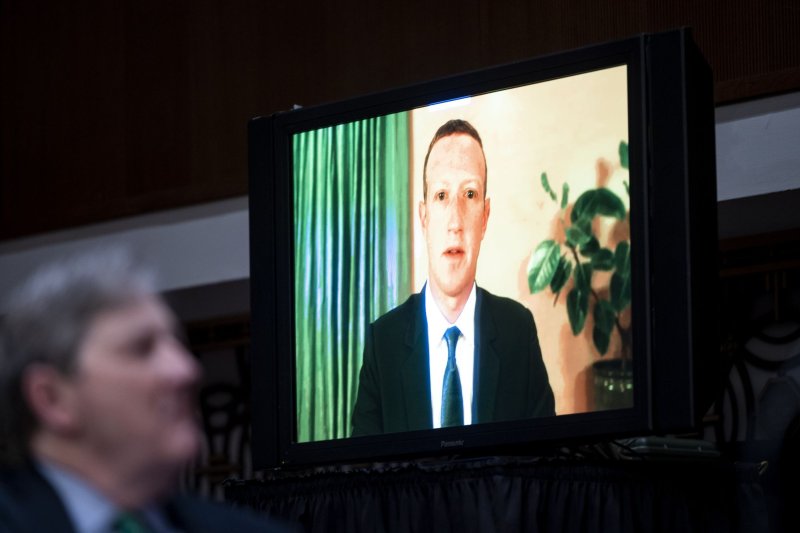 Sen. Dianne Feinstein, D-Calif., the ranking Democrat on the Senate judiciary committee, is seen during Tuesday's hearing, which examined how Facebook and Twitter moderated content during the 2020 U.S. presidential campaign, on on Capitol Hill in Washington, D.C. Photo by Hannah McKay/UPI/Pool | License Photo

Nov. 17 (UPI) -- Partisan divides over the role of social media platforms in U.S. elections were on display Tuesday as Facebook founder Mark Zuckerberg and Twitter CEO Jack Dorsey were called to answer questions from the Senate judiciary committee.

The tech leaders appeared remotely before the committee and were asked how their platforms handled the spread of information -- and potential misinformation -- during the 2020 election.

While both companies took steps to curb the spread of misinformation in the weeks and months before Election Day, Republican panel members grilled the pair about what they characterized as bias against President Donald Trump and conservatives in general.

Sen. Ted Cruz, R-Texas, accused Twitter of "taking a disputed policy position" by flagging tweets alleging fraud in the 2020 election, saying this makes Twitter a publisher and therefore not eligible for protection under Section 230 of the Communications Decency Act, which shields social platforms from responsibility for user content and says they are under no obligation to moderate.

During and beyond the presidential campaign, Twitter has repeatedly flagged Trump's tweets that contain inaccurate or misleading information. In many of those tweets, he attempted to claim victory in key battleground states and has repeatedly made unfounded accusations of voter fraud and misconduct.

Dorsey said the warnings placed on such posts lead to "a broader conversation with tweets from publishers and people all around the country."

RELATED Google extends work from home to summer 2021 amid pandemic

Lee also said Facebook's use of third-party fact-checkers allows the company to avoid accountability for its content moderation decisions to which Zuckerberg replied that users have expressed that they do not want to see misinformation but simultaneously do not want the company to act as "the arbiter of truth" related to content posted online.

"Within those bounds, we've tried to create a fact-checking program that works with independent third parties who have been accredited by the Poynter Institute for Journalism ... and we give those fact-checkers the latitude to determine whether ads or other content on our service is accurate."

The companies, Graham said, are "literally engaged in telling us what's reliable and what's not based on cable news commentary or tweets from politicians or average citizens."

Zuckerberg and Dorsey, however, defended the way they navigated the tricky election campaign -- particularly after Russian hackers made repeated efforts online and via social media to interfere and influence the vote four years ago in Trump's favor.

Dorsey said he recognizes that Twitter had made a mistake in the way it handled the New York Post stories, and agreed that social media companies need to be more transparent about why they label or remove posts.

Zuckerberg said he was pleased with Facebook's efforts.

"From what we've seen so far, our systems worked well," he said.

Democratic panel members, meanwhile, criticized the Republican majority for even holding the hearing.

"This hearing is not a serious one. It is a political sideshow -- a public tar and feathering," the committee's top Democrat, Sen. Richard Blumenthal of Connecticut, said in his opening remarks.

Tuesday was the second time Zuckerberg and Dorsey appeared in the Senate to testify in the last three weeks. Late last month, they testified with Google CEO Sundar Pichai at a hearing about Section 230.

Blumenthal chided Republicans for failing to call Pichai and Google to take part in Tuesday's hearing.

"Google has been given a pass from today's hearing," he said. "It's been rewarded by this committee for its timidity, doing even less than [Facebook and Twitter] have to live up to its responsibilities."