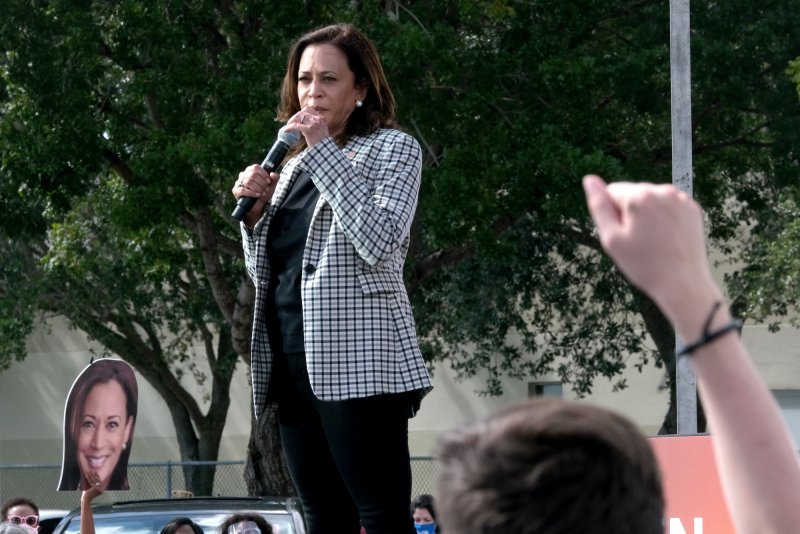 Kamala Harris is the first woman elected vice president of the United States. She's also the first Black and South Asian American to serve as second in command. Photo by Gary I Rothstein/UPI | License Photo

Nov. 7 (UPI) -- The 56-year-old daughter of Indian and Jamaican immigrants will be the first woman and first person to identify as Black and as South Asian-American in the role of vice president.

Kamala Harris graduated from Howard University in Washington, D.C. and the University of California, Hastings College of Law. Then, as a lawyer, she prosecuted domestic violence and child exploitation cases.

Harris initiated into Alpha Kappa Alpha sorority, a close-knit network of Black women nationwide, while at Howard. She will also be the first vice president to have graduated from a historically Black college and the first to be a Black sorority member.

She made other historic achievements for women of color in political office before breaking the glass ceiling for second-highest officer of the executive branch.

A former San Francisco district attorney, Harris was previously elected as the first Black woman to serve as California's attorney general. In 2016, when she was elected a U.S. senator, she became only the second Black woman in the chamber's history.

Harris was born in Oakland, Calif., on Oct. 20, 1964. Her mother, Shyamala Gopalan, a biologist who worked on breast cancer research, arrived in the United States from India in 1958 as a 19-year-old graduate student at the University of California, Berkeley. Gopalan died in 2009. Harris's Jamaican-born father, Donald Harris, is a Stanford University emeritus economic professor, who arrived at the same campus as her mom in 1961 as a graduate student, where they met.

Harris' white and Jewish husband, Douglas Emhoff, will also make history as the first second gentleman. Harris has step-children Cole and Ella from her husband's first marriage, who call her "Momala."

Rep. Pramila Jayapal, D-Wash., who described the two families' intertwined history in South India in an op-ed in The Los Angeles Times, said Harris' ascent has been a deep source of pride among South Asians.

Harris has been committed to racial justice issues from her early years in Oakland and Berkeley, Calif., supporters said. She has been inspired by Shirley Chisholm, the first Black woman to mount a national campaign for president, whom she heard speak in 1971 at a Black cultural center in Berkeley.

"Talk about strength!," Harris wrote in a memoir of memories about her early years in Oakland, which also included memories of chants, shouts and a "sea of legs moving about," in protests for racial justice.

"Here you have now this remarkable, brilliant, prepared African-American woman, South Asian woman, ready to fulfill the dreams and aspirations of Shirley Chisholm and myself and so many women of color," Lee said. "This is exciting and is finally a breakthrough that so many of us have been waiting for. And it didn't come easy."

'We did it. We did it Joe!' -- U.S. crowds take to streets after Biden win Watch live: President-elect Joe Biden to speak in Delaware

U.S. News // 20 minutes ago
Seven students, driver injured in New York school bus crash
Dec. 1 (UPI) -- A bus crash in Spring Valley, N.Y., has injured seven yeshiva students ad their driver. The crash occurred on a road that is often used as a shortcut by busses.

U.S. News // 3 hours ago
Key inflation number cools; Biden says economic plan is working
Dec. 1 (UPI) -- In a sign that U.S. inflation is cooling, the core personal consumption expenditures price index for October rose 0.2% for the month, up 5% compared to a year ago. That's lower than September's rise of 0.5%.

U.S. News // 6 hours ago
Growing number of rural Texas counties declare immigration 'disasters'
SULPHUR SPRINGS, Texas, Dec. 1 (UPI) -- More than 500 miles separate Hopkins County from the Texas-Mexico border. The distance did not stop the county commissioners from declaring a "local state of disaster" caused by an "invasion" of immigrants.
Advertisement