Police in Portland said they have confiscated weapons from protesters including a rifle, hammers and an explosive device. Photo courtesy of Multnomah County Sheriff's Office/Twitter

Nov. 5 (UPI) -- Authorities said at least 30 people have been arrested overnight in Portland, Ore., and New York City amid protests that erupted in response to the U.S. presidential election.

At least 10 people were arrested Wednesday evening in downtown Portland where a demonstration was declared a riot as police were pelted with projectiles, storefronts were smashed and ATMs were damaged.

Police said a man arrested for throwing a molotov cocktail at officers was in possession of a loaded rifle, several ammunition magazines, an improvised explosive device, a knife, cans of spray paint and was wearing a tactical vest with ballistic plates when he was detained.

Commercial-grade fireworks, hammers and at least one gas mask were also obtained from those arrested, authorities said.

The demonstration of some 350 people formed in the North Park Blocks of Portland before marching downtown and was declared a riot after the violence erupted, police said.

In New York City, police said more than 20 people were arrested, accusing them of attempting to "hijack a peaceful protest by lighting fires, throwing garbage and eggs in Manhattan."

The New York Police Department said on Twitter that officers had confiscated weapons such as knives and M80 fireworks while attempting to disperse a demonstration.

"We appreciate and value the importance of freedom of speech," the NYPD said in a statement. "Our top priority is and always will be safety." 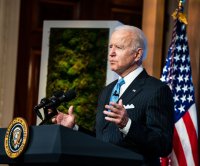 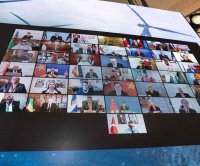 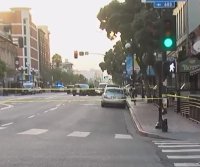