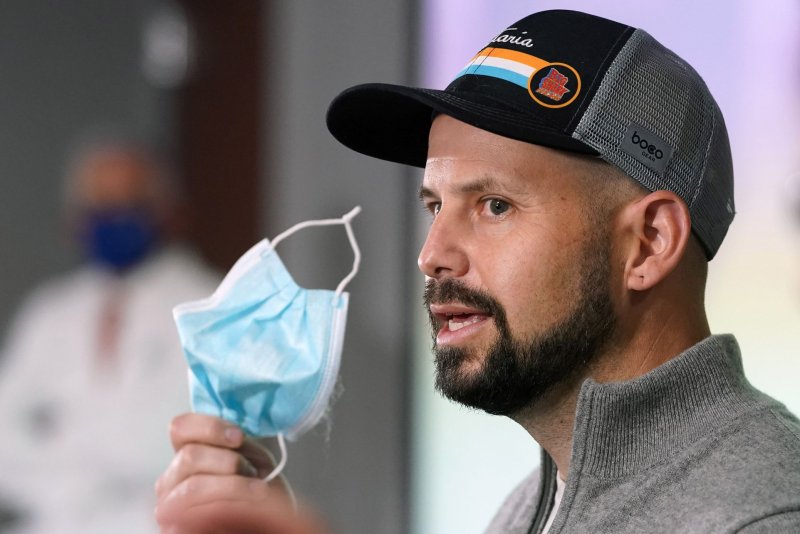 Missouri restaurant owner Gerald Craft talks Monday about the importance of wearing a mask during a briefing of the St. Louis Metropolitan Pandemic Task Force, in Earth City, Mo. Craft shared his story about how difficult it's been for food establishments during the pandemic. Photo by Bill Greenblatt/UPI | License Photo

Oct. 27 (UPI) -- After compiling 300,000 new COVID-19 cases in just four days, the United States added close to 70,000 to that total on Monday, according to updated data from Johns Hopkins University.

Researchers at the university listed another 66,800 cases and close to 500 additional deaths nationwide for Monday. The United States hasn't seen fewer than 60,000 cases for any one day in over a week.

For the past week, the United States has averaged about 63,500 new cases and more than 800 deaths per day.

Nearly 43,000 patients were hospitalized Monday, according to the COVID Tracking Project.

There have been 8.71 million cases and 225,800 deaths in the United States since the start of the pandemic, according to Johns Hopkins.

In Massachusetts, more than a dozen cities were forced to return to tighter measures after falling into the state's "red zone" for COVID-19 transmission.

The cities, including Holyoke and Plymouth, had previously been allowed to increase capacity in gyms, museums, libraries and performance venues. Now, many of those businesses will have to close or scale back capacity to levels seen earlier this year.

Massachusetts on Monday saw a third straight day of at least 1,000 new cases.

In Idaho, officials rolled back the state's reopening plans and re-imposed some restrictions amid one of the nation's most intense recent outbreaks.

Gov. Brad Little ordered indoor gatherings limited to no more than 50 people and outdoor gatherings to 25% of capacity. The measure also requires distancing at all gatherings and limits bars and restaurants to seated customers at tables.

Little, who had resisted new measures, said the move is necessary to prevent the state's healthcare system from becoming overwhelmed.

"Hospitals throughout the state are quickly filling up or are already full with COVID-19 patients and other patients, and way too many healthcare workers are out sick with COVID-19," he said.

Idaho has the nation's fifth-highest transmission rate, according to the Brown School of Public Health.

In Utah, health officials say hospitals may soon reach maximum occupancy for intensive care and warned that facilities are close to implementing emergency plans that may result in rationed care.

"We have to think in the next week, or two, that we're going to be at the maximum of even our contingency planning for ICU beds," Utah Hospital Association President Greg Bell told KSL Radio.

Under the criteria, worsening intensive care patients would be moved out of ICU units and younger patients would receive priority care, as older adults are more likely to die.

"This is NOT OK," Utah state epidemiologist Dr. Angela Dunn tweeted. "It is maddening that we are planning to ration care in Utah. Unacceptable.

"We must do EVERYTHING we can to slow [the] spread. No excuses."

U.S. News // 42 minutes ago
Judge finalizes verdict for Depp vs. Heard defamation trial
June 25 (UPI) -- A Virginia judge has finalized the verdict in the defamation case between Johnny Depp and Amber Heard after the former couple failed to reach a settlement.

U.S. News // 1 hour ago
Laundrie admits to killing Petito in notebook pages, calls it 'merciful'
June 25 (UPI) -- Brian Laundrie wrote in his notebook that he thought his killing of fiancée Gabby Petito last year in Wyoming was "merciful," pages released by his family attorney show.

U.S. News // 3 hours ago
Southwest showers, storms to keep fire risk at bay
While the rain will help dent the ongoing drought and keep wildfire concerns at bay, too much rain at once can lead to the opposite problem, with flash flooding a possibility.

U.S. News // 4 hours ago
Protesters react nationwide to abortion ruling, tear gas deployed in Arizona
June 25 (UPI) -- Activists took to the streets across the nation in the hours after the Supreme Court overturned nearly 50 years of federal abortion rights guaranteed under Roe vs. Wade.

Lebanon, Israel at a crossroads for gas wealth prospects