Army: Vanessa Guillen's death was 'in the line of duty'

Spc. Vanessa Guillen was reported missing April 23, a day after she was last seen in the parking lot of her Regimental Engineer Squadron Headquarters at Fort Hood in Texas. Photo courtesy Fort Hood/Twitter

Oct. 21 (UPI) -- The United States Army has ruled that Spc. Vanessa Guillen died "in the line of duty" and that her family is entitled to receive military benefits.

Texas' Fort Hood, where Guillen was stationed, announced the determination of her death in a statement on Tuesday, saying it was made following an investigation.

"This investigation concluded that Vanessa's death was 'in the line of duty,'" the statement read. "The Army conducts a line of duty determination for all Soldier deaths."

The benefits available to her family include compensation for expenses, a funeral for Guillen with full military honors, life insurance and final pay allowances, the statement said.

Guillen's remains were found dismembered and burned in late June, months after she was reported missing from the base on April 23.

Her death sparked outrage and prompted the Army last month to expand its investigation into her killing to include the chain-of-command at Fort Hood.

Spc. Aaron David Robinson, who was also stationed on the base, died by self-inflicted gunshot as he was being pursued as a suspect in Guillen's death.

Prosecutors accused Robinson of killing Guillen with a hammer on the base and then disposing of her remains.

Cecily Aguilar was also arrested and charged in July for helping Robinson, her boyfriend, with dismembering Guillen's body, burning it and then burying it.

Guillen's family has said that Robinson had sexually harassed Guillen. 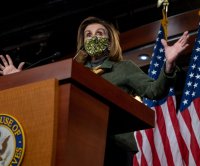 U.S. News // 6 hours ago
FAA orders inspections for 777 engines like one that failed over Denver
Feb. 24 (UPI) -- The Federal Aviation Administration has ordered mandatory inspections for fan blades on some Boeing 777s after an engine failed in mid-air on a flight to Hawaii last weekend.

U.S. News // 6 hours ago
Biden to order 100-day review for U.S. supply chains amid shortages
Feb. 24 (UPI) -- President Joe Biden will sign an executive order Wednesday calling for a review of supply chains across federal agencies in the wake of shortages of essential goods ranging from medical equipment to computer chips.