Women's March leaders said they also hope to build momentum to vote Trump out of office, and energize women to get involved in activism and politics.

"Everything we've been doing has been leading up to this," said Caitlin Breedlove, deputy executive director of organizational advancement for the Women's March. "We're not only in resistance. We're actually fighting for what we need to build."

Saturday's tent-pole event in Washington was permitted for 10,000 attendees, and organizers said some 380 events were planned throughout the country.

The Women's March nearly four years ago attracted millions of people to protest in cities nationwide against Trump and for women's political activism. Organizers this year said more than 116,000 people have pledged to participate nationwide amid concerns about lower turnout due to COVID-19.

The marches are being held days before the Senate is set to hold its first vote to confirm Barrett to replace the late Justice Ruth Bader Ginsburg, a liberal justice and feminist icon. Barrett would cement a 6-3 conservative advantage on the court.

The D.C. rally began around 11 a.m. Saturday at Freedom Plaza with hundreds of women urging people to vote and call on Congress to suspend the Supreme Court confirmation. Participants planned to later march down Pennsylvania Avenue and Constitution Avenue to the Supreme Court.

About a dozen women lined up a in a row were clothed in red dresses and white bonnets -- a nod to The Handmaid's Tale -- with signs hanging from their necks, which read "Trump Pence OUT NOW!"

The costumes also were a reference to Barrett's leadership role in the Christian group People of Praise, a position called "handmaiden" until 2017.

"Women are threatened in a world where a Christian theocracy is threatening to take over," Kelsey Weir, a 29-year-old demonstrator holding a sign with the words, "Women Against the Patriarchy" said, as she pointed to the women in the handmaiden costumes. "This is the crisis for our world. The next few weeks are going to decide so many things for women."

Critics of Barrett fear she will cast a deciding vote that will threaten the reproductive rights of women and the Affordable Care Act.

U.S. News // 9 hours ago
NRA files for bankruptcy, to move to Texas
Jan. 15 (UPI) -- The National Rifle Association filed for bankruptcy Friday and said it plans to implement a restructuring plan, moving the organization from New York to Texas. 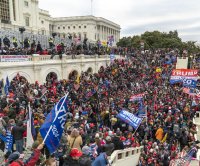 U.S. News // 16 hours ago
Biden gets pending @POTUS Twitter account, but not Trump followers
Jan. 15 (UPI) -- President-elect Joe Biden has started a new transitional Twitter account to build followers going into his new administration, but he will have to build the official Twitter base from scratch.

U.S. News // 18 hours ago
U.S. retail sales declined in December, but were better than 2019
Jan. 15 (UPI) -- Retail sales in the United States continued to slide in December for the third straight month, the Commerce Department said in is monthly economic assessment Friday.