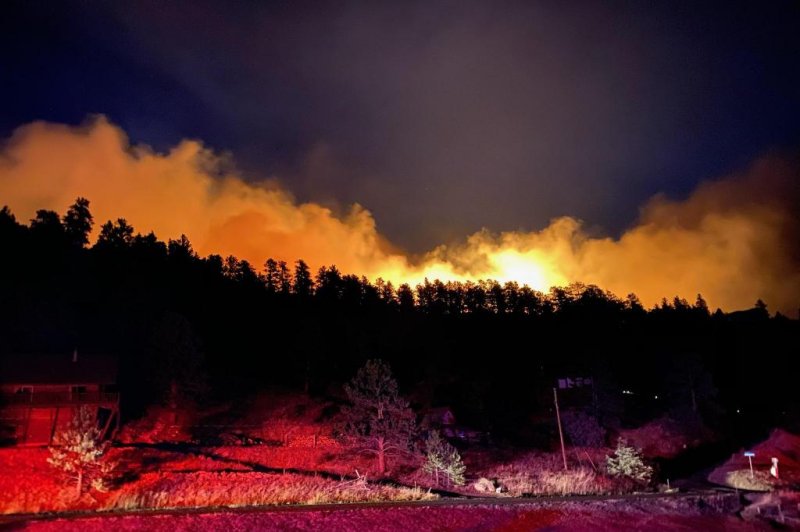 Two Colorado wildfires -- one of which is the largest in the state’s history -- grew by thousands of acres Friday. Image via Denver Fire Department/Twitter

Oct. 17 (UPI) -- Two Colorado wildfires -- one of which is the largest in the state's history -- grew by thousands of acres Friday amid high winds and low relative humidity.

On Saturday morning Grand County Sheriff Brett Schroetlin issued an evacuation notice for residents of the area near Colorado Highway 125 due to the East Troublesome fire near the state's northern border.

Firefighters have not contained the blaze, which has also prompted the closure of a section of Highway 125 and the opening of an evacuation center.

The Cameron Peak fire near Fort Collins grew 20,000 acres Friday for a total of 187,537 acres or 293 square miles burning as of Saturday morning.

Authorities have issued a new round of evacuation orders for those living in the foothills immediately west of Fort Collins and south of the Big Thompson Canyon.

The fire, which ignited Aug. 13, is 57% contained, and is considered the largest fire in Colorado's history.

A cold front is expected to move over the Front Range Saturday evening, reducing winds and reducing temperatures, but until then gusts as high as 50 miles per hour are expected with winds of up to 70 miles per hour about 9,000 feet.

Air quality in the Fort Collins area is expected to be unhealthy for sensitive groups until Sunday.

Here are a couple of pictures from our #DenverFireDepartment Strike Team taken last night and this morning at the #CameronPeakFire #StaySafe pic.twitter.com/nm5QtDPaLk— Denver Fire Dept. (@Denver_Fire) October 17, 2020

RELATED Tens of thousands without power in California after wildfire blackout