Lake County, Ill., State's Attorney Michael Nerheim said Tuesday that an investigation has found no evidence that the gun Rittenhouse used in the killings was physically possessed by him Illinois.

Rittenhouse, 17, is being held at the Lake County juvenile detention center in Waukegan. Wisconsin prosecutors are working to extradite him to face six charges, including first-degree intentional homicide, for shooting two people on Aug. 28 during anti-police brutality protests in Kenosha.

Rittenhouse is scheduled to appear in Lake County court on Oct. 30 for an extradition hearing.

Defense attorneys are fighting the move, arguing that he acted in self-defense when he shot Joseph Rosenbaum and Anthony Huber dead and injured another person with an AR-15-style rifle at a rally where activists were protesting the police shooting of Jacob Blake on Aug. 23.

Nerheim said the investigation showed Rittenhouse's gun was bought, stored and used in Wisconsin, preventing prosecutors from charging him in Illinois.

Advertisement
Video of the shooting taken by a witness shows Rittenhouse running in the street after he shot Rosenbaum. He fell while fleeing, at which point Huber tried to grab the rifle and Rittenhouse shot him.

Rittenhouse considers himself a member of a right-wing militia and was acting as self-appointed security during the protests.

U.S. News // 3 hours ago
U.S. calls for sustained, substantive talks with North Korea
Oct. 21 (UPI) -- the U.S. ambassador to the United Nations said it was time for the Asian nation to halt its belligerent behavior and engage in "substantive and substantive dialogues" toward denuclearizing the Korean Peninsula. 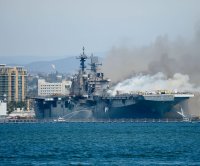 U.S. News // 13 hours ago
Paris Hilton advocates for teen bill of rights in fight against treatment facilities
Oct. 20 (UPI) -- TV personality Paris Hilton visited Capitol Hill on Wednesday to push for legislation to reform the nation's facilities for troubled teenagers, sharing her own experience of living in such a treatment center.
Advertisement