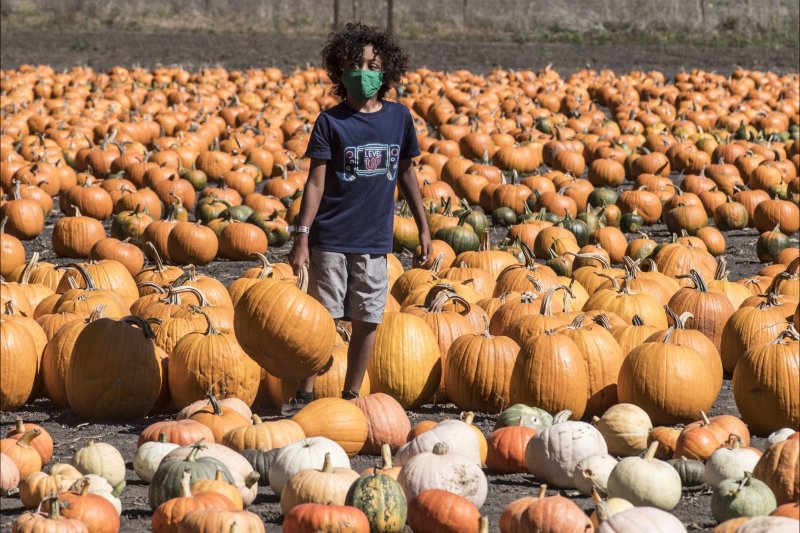 A masked attendee stands in a pumpkin patch in Half Moon Bay, Calif., on Monday. The city's Art & Pumpkin festival has been canceled this year due to the pandemic, but the annual Championship Pumpkin Weigh-off was held on private property. Photo by Terry Schmitt/UPI | License Photo

Oct. 13 (UPI) -- The national death toll from COVID-19 has surpassed 215,000, according to updated figures Tuesday from research at Johns Hopkins University.

The data showed about 215,100 coronavirus deaths and an addition of about 41,700 cases nationwide on Monday. The figure is a decrease from about 44,600 cases a day earlier, which followed four straight days over 50,000.

There were an additional 300 deaths on Monday, according to the data, which also showed a total of 7.8 million cases nationwide since the start of the pandemic.

The data came on the same day researchers at Virginia Commonwealth University said U.S. deaths during the first five months of the health crisis may have been undercounted by as many as 75,000.

Over the past week, new cases nationwide have averaged almost 50,000 -- a substantial increase over the previous week.

Dr. Anthony Fauci, director of the National Institute of Allergy and Infectious Disease, told CNBC Monday the United States is in a "bad place" with the colder months approaching.

"We have got to turn this around," he said.

RELATED WHO: Herd immunity through COVID-19 exposure will cause suffering, death

"We have got to convince Americans that public health measures do not mean shutting the country down," he added. "It's actually an avenue to keeping the country open."

Later Monday, Johnson & Johnson announced it had paused a late-stage human trial for its potential vaccine due to an adverse reaction in one of the volunteers.

Johnson & Johnson executive Joseph Wolk said although it's a setback, the pause in the trial should reassure Americans that the company is following strict scientific and safety standards.

RELATED First case of COVID-19 reinfection in U.S. had no known risk factors for disease

In Colorado, Denver Mayor Michael Hancock warned that a surge in cases has brought the city to a "fork in the road," as its seven-day average reached a record high.

The city, he said, could impose new restrictions if the trends don't change quickly.

"That means our capacity in restaurants, retail business, event spaces and personal services, among others, get cut in half," Hancock said. "When so many business right now are struggling just to stay open, that would mean absolute devastation to those businesses."

Yellowstone County health officer John Felton said places of worship will be capped at 50% of regular capacity and no more than 25 people will be allowed to gather in any one place, indoors or outdoors. The county has a positivity rate of 62 per 100,000 people, among the highest in the nation.

At 54 positive cases per 100,000, Montana's rate is the third-highest in the United States and trails only North and South Dakota, according to the Brown School of Public Health.

Billings Clinic CEO Scott Ellner has told business leaders the surge is "putting a tremendous strain" on the healthcare system.

"While we remain open and we are making adjustments, our health care workers are tired, they're fatigued," he said.

U.S. News // 2 hours ago
Attempted murder suspect on the run still using dating apps
Jan. 29 (UPI) -- A Nevada man accused of attempted murder and torturing a woman in Oregon is on the run and still active on dating sites, police say.

U.S. News // 6 hours ago
6 killed, more injured in New York bus crash
Jan. 29 (UPI) -- Six people are dead and another three are injured after a box truck and a bus collided head-on in New York.

U.S. News // 6 hours ago
Jewish family sues NYC's Guggenheim Museum seeking return of Picasso painting
Jan. 29 (UPI) -- A Jewish family has filed a lawsuit against the Guggenheim Museum in New York City seeking the repatriation of an iconic painting by Pablo Picasso that they allege was sold to allow the family to escape Nazi Germany.