Pelosi introduces bill to set up comission on presidential capacity

Rep. Jamie Raskin, D-Md, and Speaker of the House Nancy Pelosi, D-Calif., hold a press conference on a proposed bill to alter the 25th Amendment, at the U.S. Capitol in Washington, D.C. on Friday. Photo by Kevin Dietsch/UPI | License Photo

Oct. 9 (UPI) -- House Speaker Nancy Pelosi introduced legislation Friday to create a bipartisan commission to determine if a sitting president is capable of carrying out the office's duties.

She said the legislation is not aimed at President Donald Trump.

Pelosi appeared at a news conference with the author of the legislation, Rep. Jamie Raskin, D-Md., to push for the legislation calling for a commission with 16 members split evenly between Democrats and Republicans who are medical experts or former high-ranking executive branch officials.

The 25th Amendment addresses procedures on a transfer of power to the vice president in case of a president's death, incapacitation, removal or resignation, ratified after the assassination of President John F. Kennedy.

An independent commission meant to help with that transition was never created, though.

"This is not about President Trump," Pelosi said. "He will face the judgment of the voters, but he shows the need for us to create a process for future presidents. This legislation applies to future presidents, but we are reminded of the necessity of action by the health of the current president."

While Pelosi suggested the legislation was pushed by policy and not the person currently in office, Trump responded on Twitter, attacking Democratic presidential nominee Joe Biden.

"Crazy Nancy Pelosi is looking at the 25th Amendment in order to replace Joe Biden with Kamala Harris," Trump said. "The Dems want that to happen fast because Sleepy Joe is out of it."

Trump's health has been a concern since he was diagnosed with the novel coronavirus. The president's doctors said Trump needed supplemental oxygen after he initially tested positive for the virus.

He was then given a mix of treatments to help fight the virus, including an experimental antibody treatment not available to the public and steroids.

"In the age of COVID-19, where a lot of government actors have been afflicted by it, we need to act," Raskin said.

U.S. News // 6 hours ago
1 dead, 4 injured in Thanksgiving Day shooting in Nevada
Nov. 27 (UPI) -- Police in Nevada said they have arrested two suspects after an early morning shooting on Thanksgiving left one person dead and four others injured.

U.S. News // 13 hours ago
TSA screens 5 million passengers in week before Thanksgiving
Nov. 26 (UPI) -- More than 5 million travelers were screened by the U.S. Transportation Security Administration between Friday and Wednesday amid the Thanksgiving holiday. 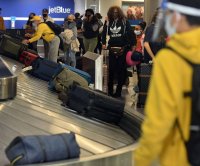