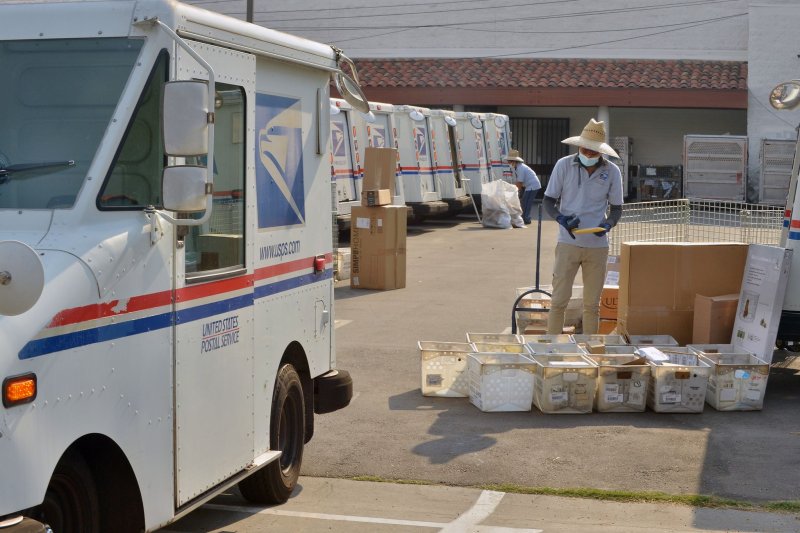 The U.S. Supreme Court on Monday ruled in favor of South Carolina Republicans' argument that mail-in ballots must contain a witness signature despite calls to waive the requirement due to the COVD-19 pandemic. Photo by Jim Ruymen/UPI | License Photo

Oct. 5 (UPI) -- The U.S. Supreme Court on Monday ruled in favor of South Carolina Republicans, stating all mail-in ballots must be signed by a witness.

The Supreme Court's order does concede that mail-in ballots already cast and received within two days of the order being issued would be accepted.

Drew McKissick, chairman of the South Carolina Republican Party, cheered the ruling as a victory over Democrats' efforts to "hijack a pandemic."

"We're pleased the Supreme Court reinstated the witness signature requirement and recognized its importance in helping to prevent election fraud," McKissick said in a statement. "We were willing to go all the way to the highest court in the land, and it's a great day for those who care about the security and integrity of our elections."

Justices Clarence Thomas, Samuel Alito, Jr., and Neil Gorsuch said they would grant the application in full. The order does not list any dissenting justices.

The ruling follows South Carolina Democrats filing a lawsuit against election officials over the requirement of a witness' signature on a mail-in ballot, with U.S. District Judge Michelle Childs of Columbia imposing a preliminary injunction against the practice last month due to health concerns amid the coronavirus pandemic.

In the brief order on Monday, Justice Brett Kavanaugh, writing for himself, said the state legislature's decision to make changes to election rules to address COVID-19 "should not be subject to second-guessing by an 'unelected federal judiciary,' which lacks the background, competence and expertise to assess public health and is not accountable to the people."

Kavanaugh added that the second reason for the ruling is that the Supreme Court for years has repeatedly stated that federal courts "should not alter state election rules in the period so close to an election."

"By enjoining South Carolina's witness requirement shortly before the election, the District Court defied that principle and this Court's precedents," Kavanaugh wrote.

U.S. News // 15 hours ago
Arizona secures supplier for death penalty drug
March 6 (UPI) -- Arizona announced this week it's found a supplier of pentobarbital, a sedative used in lethal injections, and is prepared to resume executions after a nearly seven-year hiatus.

U.S. News // 11 hours ago
Judge rules recent ERA ratifications came too late to count
March 6 (UPI) -- A federal district judge ruled Friday that the deadline to ratify the Equal Rights Amendment "expired long ago" and that that three states' recent ratifications of the amendment do not count.

U.S. News // 20 hours ago
Major warmup on the way for millions across the central, eastern U.S.
After multiple one-day teases of springlike warmth amidst an overall chilly end to meteorological winter, good news is in store for many fans of warm weather across the central and eastern United States.