Oct. 2 (UPI) -- Republican National Committee Chair Ronna McDaniel has tested positive for COVID-19 and is isolating at her home in Michigan, the party said Friday.

McDaniel tested positive Wednesday and had been experiencing mild symptoms.

The Republican Party chairwoman, who spent time with President Donald Trump a week ago, said nothing about her test but wished the president and first lady Melania Trump a quick recovery in a tweet.

The Trumps announced they had tested positive earlier Friday.

McDaniel, who lives in the Detroit suburb of Northville, has supported Trump's response to the crisis and, like the president, has been criticized for downplaying the health threat.

"The president was calm and steady in a time of unrest and uncertainty," McDaniel, the niece of Sen. Mitt Romney, R-Utah, said previously. "And I think history will look back on him well as to how he handled this pandemic."

U.S. News // 53 minutes ago
Airbnb aims for $35 billion valuation in IPO this month
Dec. 1 (UPI) -- Airbnb said in a federal filing Tuesday it plans to list about 50 million shares from $44 to $50 per share during its mid-December initial public offering in a plan to raise $2.6 billion.

U.S. News // 1 hour ago
Bipartisan group proposes $900B COVID-19 stimulus plan to break deadlock
Dec. 1 (UPI) -- A bipartisan group of lawmakers on Tuesday unveiled compromise legislation for a new round of coronavirus stimulus worth more than $900 billion. 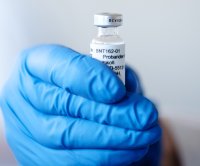