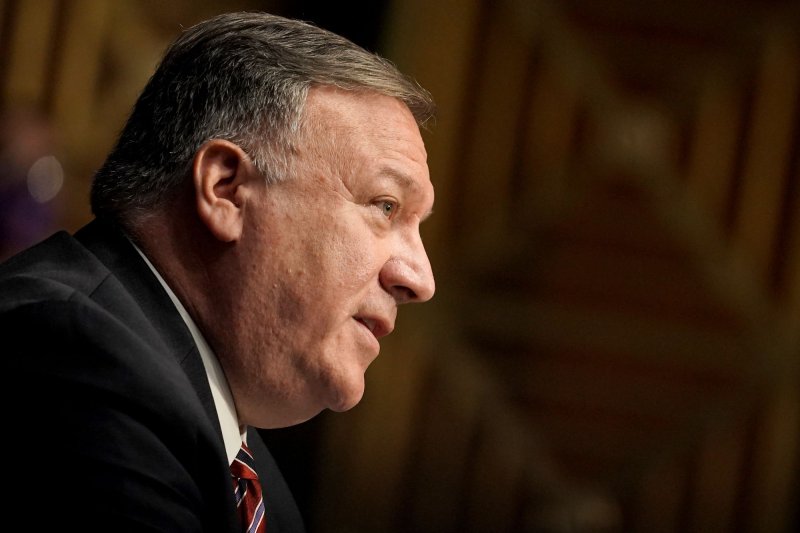 Sept. 2 (UPI) -- In a move that is expected to further strain already fraught relations between Washington and Beijing, the Trump administration on Wednesday announced new restrictions on the movement of Chinese diplomats in the United States.

U.S. Secretary of State Mike Pompeo said the restrictions were in response to those the People's Republic of China has long placed upon U.S. diplomats working in the Asian nation.

"In response to the PRC's longstanding restrictions on U.S. diplomats and refusal to engage in good faith on fundamental matters of reciprocity and mutual respect, the Department of State is compelled to impose certain new requirements on PRC diplomats," Pompeo said in a statement.

Senior Chinese diplomats working in the United States are now required to receive approval to visit U.S. university campuses and meet government officials. State Department approval will also be required for its embassy and consular posts to hold cultural events with an audience larger than 50 people outside of mission properties.

The State Department said it will also "take action" to ensure all official PRC embassy and consular social media accounts are properly identified as such since "the U.S. Embassy is denied unfettered access to PRC social media and PRC citizens are blocked from using Twitter and Facebook."

Pompeo told reporters in a briefing that the restrictions were being implemented in the name of reciprocity.

"We're simply demanding reciprocity," he said. "Access for our diplomats in China should be reflective of the access that Chinese diplomats in the United States have, and today's steps will move use substantially in that direction."

The Trump administration has long complained that there is a lack of reciprocity between how it treats Chinese diplomats compared to how China treats U.S. employees, and has taken action against PRC media organizations to equalize that relationship.

Earlier this year, the State Department designated several Chinese state-run news organizations in the United States as foreign missions and then capped the number of Chinese nationals these companies may employ to create reciprocity as the Asian nation has for years "imposed increasingly harsh surveillance, harassment and intimidation against American and other foreign journalists operating in China," Pompeo said in March.

"As we have done in other areas of U.S.-China relationship, we seek to establish a long-overdue level playing field," Pompeo said, adding the moves were pursued in hopes to spur Beijing to adopt fairer practices.

On Wednesday, the State Department said China imposes "significant barriers" on U.S. diplomats working in China including an opaque approval process designed to hinder conducting their regular work and obstruct their attempts to connect with Chinese citizens and host cultural events, secure meetings with officials and visit university campuses.

The restrictions come as relations between the two countries are at their lowest point in decades.

Since 2018, the two countries have been in a trade dispute but tensions ratcheted up this year as the United States has blamed China over the spread of the coronavirus and has sought to punish the Asian nation over its human rights abuses in Hong Kong and committed against its Muslim minority citizens in Xinjiang province.

Bejing has vehemently denied the accusation and accuses the United States of meddling.

The Trump administration also recently took a hard stance against China's encroachment into the South China Sea, accusing it of bullying its Asian neighbors, as well as lobbying nations to bar Chinese telecoms from participating in developing their Internet infrastructure.

U.S. News // 40 minutes ago
St. Louis Fed chief: Good Q3 would put U.S. near 'sort of full recovery'
Sept. 25 (UPI) -- The U.S. economy has bounced back surprisingly quickly from the shock of the COVID-19 pandemic and could be within reach of a greater recovery by the end of the year, one Federal Reserve president says.

U.S. News // 9 hours ago
Protests across U.S. oppose Breonna Taylor decision for 2nd night
Sept. 25 (UPI) -- For a second straight night, protesters took to the streets in cities throughout the country in response to a Kentucky grand jury's decision not to indict three officers for the death of Breonna Taylor.