Marchers wave flags during the 2020 commemoration of the 57th anniversary of the March on Washington at the Lincoln Memorial on Friday. The boyfriend of Breonna Taylor, whose death was mentioned at the march, filed a lawsuit Tuesday against Louisville Metro Police connected with her shooting. Photo by Jemal Countess/UPI | License Photo

Sept. 1 (UPI) -- The boyfriend of Breonna Taylor, who was shot to death by Louisville, Ky., Metro Police executing a no-knock search warrant in March, said Tuesday he is suing the department for assault, false arrest and other charges.

Taylor's death is among several deaths involving police that have sparked protests against police brutality around the country. Taylor's boyfriend, Kenneth Walker, was with Taylor at the time police broke into her apartment on March 13.

His attorney, Steve Romines, said Walker did not fire the shot that struck one of the officers at the scene when they broke into Taylor's apartment, as police have said. Louisville Metro Police said they returned Walker's gunfire, striking Taylor.

"We know the police are firing wildly from various angles," Romines told The Courier-Journal in Louisville. "The timeline and evidence at the scene is more indicative of (police) actually shooting [Sgt. Jonathan] Mattingly than it is Kenny Walker."

Walker's lawsuit filed in Jefferson County District Court is asking for unspecified monetary damages from the City of Louisville and Louisville Metro Police for assault, battery, false arrest and imprisonment, malicious prosecution, abuse of process, and negligence connected to the night of the shooting.

Local prosecutors filed an attempted murder charge against Walker but dropped the case in May "without prejudice," meaning it could be charged again. 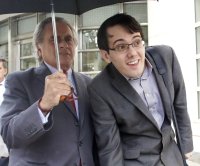