Former White House National Security Adviser Michael Flynn, shown arriving at the U.S. Federal Courthouse in Washington, D.C., on Dec. 1, 2017, will have a hearing to determine if his case should be dismissed, a federal appeals court ruled Monday. Photo by Mike Theiler/UPI | License Photo

Attorney General William Barr had moved to drop charges against Flynn in May, which were connected to false statement charges brought by special counsel Robert Mueller's investigation.

Flynn had initially pleaded guilty in 2017 to a false-statement charge, but later hired a new defense team and sought to withdraw the plea deal. President Donald Trump weighed in publicly in support of Flynn before Barr stepped in to drop the case, citing new evidence.

District Court Judge Emmet Sullivan balked initially at dropping the case, ordering a hearing on the matter. Flynn's legal team asked the appeals court to force Sullivan to drop the case without the hearing. A three-judge panel from the court agreed with the Justice Department 2-1 before the full court said they wanted to hear the case. The full court ruled 8-2 in Sullivan's favor.

Judge Thomas Griffith said it its opinion that it was premature for the appeals court to intervene before Sullivan held his hearing and made a decision.

"Today we reach the unexceptional yet important conclusion that a court of appeals should stay its hand and allow the district court to finish its work rather than hear a challenge to a decision, not yet made," Griffith said. "That is a policy the federal courts have followed since the beginning of the Republic."

Judges Karen Henderson and Neomi Rao, who ruled in favor of the Justice Department as part of the earlier three-judge panel, filed separate dissents.

U.S. News // 40 minutes ago
Trump sues Jan. 6 committee to prevent release of White House records
Oct. 18 (UPI) -- Former President Donald Trump on Monday filed a lawsuit against the House committee probing the Jan. 6 insurrection in a bid to keep it from examining White House records related to the attack. 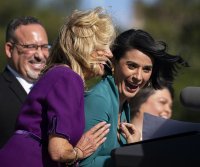 U.S. News // 5 hours ago
Jill Biden praises Teacher of the Year winners for overcoming pandemic hardships
Oct. 18 (UPI) -- First lady Jill Biden praised teachers for battling the difficulties brought on by the pandemic as she hosted the Council of Chief State School Officers' 2020 and 2021 Teachers of the Year at the White House on Monday.
Advertisement