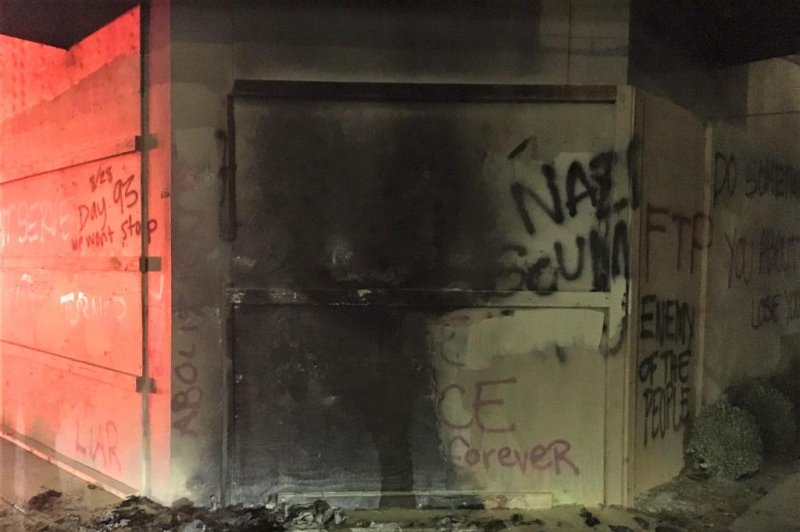 Aug. 29 (UPI) -- Protesters took to the streets for the 93rd night in a row in Portland, Ore., demonstrating at Mayor Ted Wheeler's condominium building and at a separate location near the Portland Police Association building.

The Oregonian reported that the first demonstration, in the Pearl neighborhood near downtown, ended with a dance party Friday. At the second, multiple people were arrested early Saturday after someone set a large burning object near the police union building.

Portlanders have protested against racism and police brutality every night since May 28, with demonstrations drawing the ire of President Donald Trump and criticism over handling of crowds by both local police and federal law enforcement officials.

On Friday afternoon, Wheeler posted an image of a letter he wrote to Trump on Twitter declining the president's repeated offer to send federal law enforcement to Portland.

"We don't need your politics of division and demagoguery," Wheeler wrote. "We have already seen your reckless disregard for human life in your bumbling response to the COVID pandemic. And we know you've reached the conclusion that images of violence or vandalism are your only ticket to reelection."

"If the incompetent Mayor of Portland, Ted Wheeler, doesn't get control of his city and stop the Anarchists, Agitators, Rioters and Looters, causing great danger to innocent people, we will go in and take care of matters the way they should have been taken care of 100 days ago!" Trump wrote later that night.

The North Portland demonstration began at a neighborhood park as a vigil for Emmett Till on the 65th anniversary of his lynching in Mississippi.

Later that night demonstrators lit fires in two dumpsters placed in the street and set an object that appeared to be a mattress or box spring against the boarded-up police union building.

According to media and police reports, someone appeared to add accelerant to the object, causing the plywood on the building to catch fire.

Officers then demanded that protesters scatter and began making arrests. As of Saturday afternoon the Portland Police Bureau had not announced the number of people arrested or the names of arrestees.

Early Saturday morning, witnesses said a car drove by the demonstration and fired shots, according to a video of the scene posted to Twitter by an Oregon Public Broadcasting reporter. An observer found shell casings at the scene, but no one was hurt.

The demonstration in Wheeler's building was punctuated by an encounter between activists and former Minnesota Timberwolves executive David Kahn, who lives in the same building and said he was a friend of Wheeler's.

He offered to set up a meeting with Wheeler to discuss the situation, but activists declined, saying they wanted to talk to the mayor -- who did not emerge Friday -- directly.