Aug. 24 (UPI) -- National Guard troops will deploy in the Wisconsin city of Kenosha after unrest and protests following the Sunday evening police-involved shooting of resident Jacob Blake, 29, who was airlifted in serious condition to a Milwaukee hospital.

A video shared on social media showed officers grabbing Blake by the shirt as he tried to get into a van. An officer fired seven shots at close range into Blake's back as he slumped over the steering wheel.

Kenosha County Supervisor Zach Rodriguez told the Milwaukee Journal Sentinel the National Guard would be in Kenosha by Monday afternoon.

Ben Crump, civil rights attorney who represents the family of George Floyd, whose police-involved death on Memorial Day sparked nationwide protests, said Blake's three sons were in the car during the shooting.

Blake is a father of five, Crump said.

Democratic Presidential nominee and former Vice President Joe Biden called for an investigation of the shooting in a statement Monday.

"Yesterday in Kenosha, Wisconsin, Jacob Blake was shot seven times in the back as police attempted to restrain him from getting into his car," Biden said. "His children watched from inside the car and bystanders watched in disbelief. And this morning, the nation wakes up yet again with grief and outrage that yet another Black American is a victim of excessive force. This calls for an immediate, full and transparent investigation and the officers must be held accountable."

President Donald Trump's chief of staff Mark Meadows told The Hill the president was briefed on the incident early Monday.

"It's too early to tell in terms of what actually happened from what I was briefed on," Meadows said.

"Obviously the video tells a story that is troubling and yet, at the same time, we'll get a full briefing within the next couple of hours," Meadows added.

Protests and fires erupted in the streets of Kenosha and Milwaukee after the video was released, causing the Kenosha Police Department to urge businesses to close for 24 hours.

The sheriff's department for Kenosha County, located along Lake Michigan about 40 miles south of Milwaukee, late Sunday issued a citywide curfew Sunday night, stating the public "needs to be off the streets for their safety."

"Tonight, Jacob Blake was shot in the back multiples times, in broad daylight, in Kenosha, Wisconsin," Wisconsin Gov. Tony Evers, a Democrat, said in a statement. "Kathy and I join his family, friends, and neighbors in hoping earnestly that he will not succumb to his injuries."

"While we do not have all of the details yet, what we know for certain is that he is not the first Black man or person to have been shot or injured or mercilessly killed at the hands of individuals in law enforcement in our state or our country," Evers said on Twitter. "We stand with all those who have and continue to demand justice equity and accountability for Black lives in our country."

The Kenosha Police Department said in a release that the shooting happened after 5 p.m. Sunday as officers were responding to a domestic incident. Blake was transported to Froedtert Hospital.

Attorney Crump said Blake was shot after attempting to break up a fight at the residence.

"[Blake's children] saw a cop shoot their father," Crump tweeted. "They will be traumatized forever. We cannot let officers violate their duty to PROTECT us."

The Wisconsin Department of Justice's Division of Criminal Investigation, which is investigating the shooting, said early Monday that the officers involved have been placed on administrative leave, the Milwaukee Journal Sentinel reported. 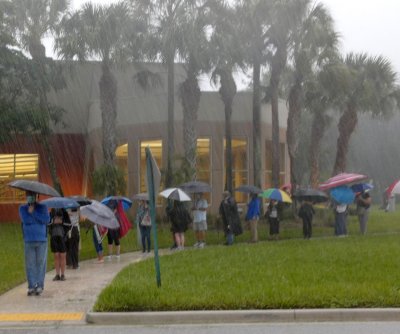 U.S. News // 5 hours ago
Florida voters wait in long lines on 1st day of early voting
Oct. 19 (UPI) -- Early voting began in the battleground state of Florida on Monday as long lines queued at numerous locations and a glitch shut down one county's website for several hours.