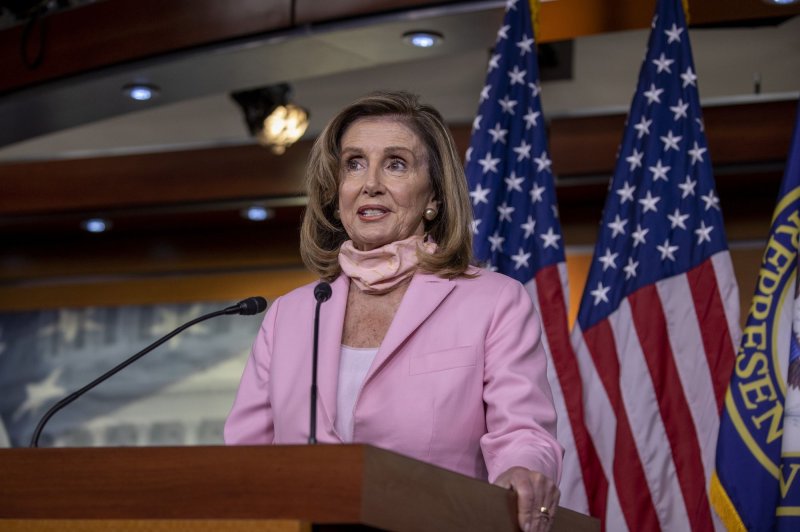 Aug. 23 (UPI) -- House Speaker Nancy Pelosi on Sunday said the Democratic party is unified in its demands for another COVID-19 stimulus legislation amid stalled negotiations with Republicans and the White House.

Pelosi appeared on CNN's State of the Union Sunday after some House Democrats last week sent her a letter calling for a stand-alone unemployment insurance bill and a return to negotiations with the White House on broader legislation.

"My caucus is standing together on this," she said. "I invite any ideas that they have. I welcome them. And there are a number of letters for one aspect or another. And I welcome that.

"But they want -- of course, we all want the negotiations to continue, but not just what the administration wants, but what the country needs."

Pelosi criticized the Trump administration for opposing additional funds for state and local governments as part of a stimulus package.

"What they say to us is why should one state help another state that may have needs? Well, we welcome them to the United States of America," she said.

White House Chief of Staff Mark Meadows told ABC News' This Week on Sunday, that President Donald Trump would be willing to sign a bill passed by the House on Saturday providing funding for the U.S. Postal Service if Democrats agree to include other economic relief measures.

"My challenge to the speaker this morning would be this -- if we agree on five, six things -- let's go ahead and pass those," Meadows said.

"I spoke to the president early this morning. He's willing to sign that, including Postal Service reform, that making sure that the money is there to make sure that deliveries of first class mail are handled quickly, efficiently and on time."

Pelosi called the House back to Washington, D.C., to vote on the "Delivering for America Act" on Saturday, which would provide $25 billion in funding for the USPS while blocking operational changes that slow down the mail-in voting process.

Trump on Saturday tweeted that the USPS does not require the funds, calling the bill a "hoax" by Democrats, and Meadows described it as a "largely messaging bill" that Pelosi knew was unlikely to be signed into law.

Twitter on Sunday again flagged one of the president's tweets in which he said that using mail drop boxes to cast ballots is "a security disaster" and suggested they are not sanitized, causing risk of contracting COVID-19.

U.S. News // 7 hours ago
10 wounded in broad daylight drive-by shooting in Florida
Jan. 30 (UPI) -- At least four gunmen in a sedan opened fire on both sides of a street in "a challenged neighborhood" of Lakeland, Fla., injuring at least 10 people, including two critically, authorities said.

U.S. News // 18 hours ago
President Biden proclaims Baltimore rail tunnel project a 'game changer'
Jan. 30 (UPI) -- President Joe Biden spoke the launch of a project in Maryland which will help ease one of the largest rail bottlenecks in the northeast corridor.