Poll: Most in U.S. dissatisfied with treatment of Black Americans 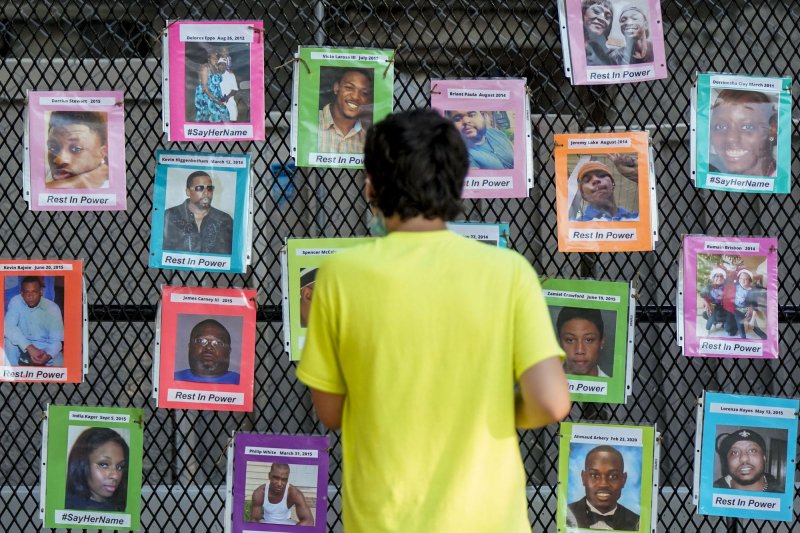 A young man looks at photographs of Black Americans who have died by violence in the United States, on a fence outside the White House in Washington, D.C., on July 4. File Photo by Leigh Vogel/UPI | License Photo

Aug. 19 (UPI) -- Overall satisfaction in the United States with the treatment of Black persons has fallen this year to a record low, Gallup said in a new survey Wednesday.

According to the poll, just 35% of U.S. adults said they are either "very" or "somewhat" satisfied with the treatment of Black communities -- a decline of 9% since the last survey two years ago and the lowest mark Gallup has recorded since it first asked the question in 2001.

Forty-one percent of White Americans expressed satisfaction, compared to 21% of Black Americans. The figure for Whites is also a record low, but Black satisfaction is 3% higher than it was in 2018.

"White Americans and U.S. adults overall have become less satisfied with the treatment of both the Hispanic and Asian people since 2018, but Black Americans' views on these are essentially unchanged."

RELATED Gallup: Fewer in U.S. satisfied with treatment of women

The poll was taken from early June to late July amid mass civil rights protests nationwide that spawned from the police killing of George Floyd in May.

Gallup polled more than 1,200 U.S. adults for the survey, which has a margin of error of between 4 and 7 points.

U.S. News // 3 hours ago
Rare nor'easter could bring lingering taste of fall
Tumbling temperatures this weekend could be here to stay. Canadian air, combined with a rare nor'easter could keep it feeling like September in the Northeast into next week.

U.S. News // 3 hours ago
Tropical rainfall to funnel into Texas, Mexico threatening flooding
Meteorologists warn that a tropical system will continue to bring flooding rainfall through southern Texas and northern Mexico in the coming days before impacting yet another portion of the United States midweek.