Aug. 13 (UPI) -- A federal judge in Pennsylvania on Thursday ordered the Trump campaign and the Republican party to produce evidence of vote-by-mail fraud in the state.

"The Court finds that instances of voter fraud are relevant to the claims and defenses in this case," Ranjan wrote.

The Democratic Party and the Sierra Club wrote to the court on Wednesday requesting information and documents detailing how the Republican Party and the Trump campaign determined the possibility of fraud, particularly related to the use of dropboxes, ballot collection and mail-in ballots.

Lawyers representing the Democrats wrote that the Trump campaign "should not be permitted to raise such spectacular fraud-related claims, particularly in this national climate."

The Trump campaign, along with the Republican National Committee, three U.S. Representatives from Pennsylvania and two Republican voters who sought to serve as poll watchers filed the lawsuit against Pennsylvania Secretary of State Kathy Boockvar and the boards of elections for all 67 of the state's counties in June.

The suit alleges that dropboxes were used unconstitutionally in the state's June 2 primary, as election officials make decisions outside of what is allowed by laws and county elections officials set up different policies throughout the state, violating constitutional guarantees of equal protection. 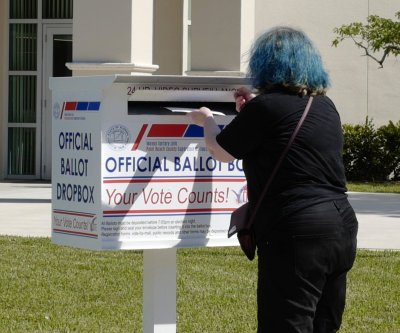 U.S. News // 7 hours ago
'Stan,' one of most complete T. rex skeletons, goes to auction
Oct. 1 (UPI) -- One of the most complete Tyrannosaurus rex skeletons in existence will be up for sale at Christie's Auction House next week, when it may set a new purchase record.