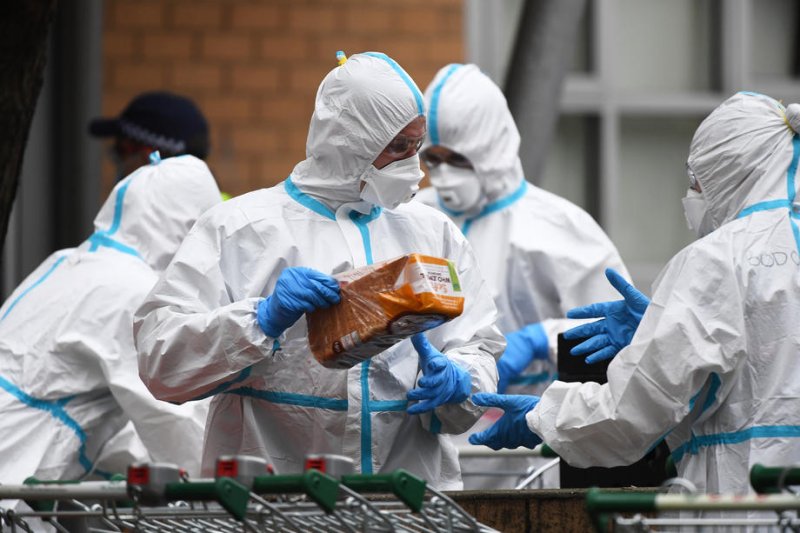 Aug. 12 (UPI) -- After more than 100 days without reporting local transmission of COVID-19, New Zealand on Wednesday reinstated lockdown measures as health officials rush to contain an outbreak of the deadly and infectious coronavirus in its largest city of Auckland.

Staring at noon Wednesday, Auckland was placed under its second-highest Alert Level 3 lockdown until Friday at midnight, meaning all public venues must close, employees must work from home, elective services at hospitals are deferred, domestic travel is limited and people may only leave their homes for essential reasons, such as groceries.

The rest of the country was placed under Alert Level 2 for at least the next three days, limiting gatherings to fewer than 100 people and advising high-risk people, such as the elderly and those with chronic illnesses, to stay home as well as other social distancing measures.

The measure comes a day after four new cases were confirmed among one family with no known source of transmission.

In a release from Tuesday, New Zealand health officials said one of the four family members had been symptomatic for five days and had no overseas travel history.

Dr. Ashley Bloomfield, director-general of health in New Zealand, told reporters Wednesday that there are also four probable cases of COVID-19 linked to the family.

They are in isolation while awaiting their test results, he said, and contact tracing is underway.

A fifth person, a woman in her 50s who recently arrived to New Zealand from Pakistan via Dubai, has also tested positive for the virus, he said. A Wednesday release states she was in managed isolation three days prior to testing positive and has since been transferred to the Auckland quarantine facility.

New Zealand had gone 102 days without local transmission of the virus following a stringent lockdown put in place in March. In early June, as that 75-day lockdown was lifted and the country moved to its lowest alert level, Prime Minister Jacinda Ardern warned that there would be new cases.

"We will almost certainly see cases here again but when it occurs it will not mean we have failed," she told the press in early June. "It is the reality of this virus. We must be and we are prepared for future cases."

The new cases bring the archipelago nation's total number of confirmed infections to 1,225 and 22 deaths.

In neighboring Australia, health officials have been attempting to control an outbreak in the state of Victoria where 410 cases and 21 deaths were recorded in the past 24 hours, making it the country's deadliest amid the pandemic.

Victoria Premier Daniel Andrews told reporters Wednesday all those who died were above the age of 70 with 16 of the cases linked to outbreaks at elderly care facilities.

Residents of Victoria have been placed under lockdown restrictions for over a month, with Melbourne, the country's second-biggest city placed under sweeping measures including a curfew on Aug. 3.

The island nation currently has around 22,000 cases and 352 deaths, according to Johns Hopkins University.

Globally, there were more than 20.2 million cases and nearly three-quarters of a million deaths to the virus since it emerged in the central Chinese city of Wuhan late last year, according to the university's tally.

U.S. News // 13 hours ago
Forecasters: Central U.S. will plunge back into winter next week
Chilly air, which has gripped the central United States all week, will be reinforced by another shot of cold weather early next week, forecasters said Saturday.

U.S. News // 15 hours ago
West Point expels 8 cadets, holds more than 50 back a year in cheating scandal
April 17 (UPI) -- West Point has expelled eight cadets and held back more than 50 for a year after completing its investigation into cheating on a remote learning May calculus exam.

U.S. News // 16 hours ago
Death toll increases to 4 in capsized boat near Louisiana; 9 missing
April 17 (UPI) -- The U.S. Coast Guard said it's recovered four bodies from a commercial vessel that capsized off the Louisiana coast earlier this week, but nine remain missing.