Lezmond Mitchell, 37, is set to die by lethal injection Aug. 26 at the U.S. Penitentiary, Terre Haute, Ind. He was sentenced to death for the 2001 murder of two Navajo people -- a woman and her granddaughter -- on reservation land.

Nez met with a U.S. pardon attorney Tuesday to advocate for a commutation for Mitchell. The Navajo Nation is against the death penalty and argues the U.S. government shouldn't be able to execute Mitchell.

"The Navajo Nation is respectfully requesting a commutation of the death sentence and the imposition of a life sentence for Mr. Mitchell," Nez and Navajo Vice President Myron Lizer said in a letter to Trump on July 31.

"This request honors our religious and traditional beliefs, the Navajo Nation's long-standing position on the death penalty for Native Americans, and our respect for the decision of the victim's family ... We need to address this issue to move forward in our trust of our federal partners and to continue to work on the importance of protecting our people."

Defense attorneys Jonathan Aminoff and Celeste Bacchi said that since the Navajo Nation was against the death penalty in Mitchell's case, the federal government used a "loophole" to charge him with a lesser crime -- carjacking resulting in death. This allowed the government to seek the death penalty without tribal approval.

The defense team also accused the U.S. government of misconduct for allegedly jailing and questioning Mitchell for 25 days without providing him a lawyer and preventing Navajos from serving on his jury.

Mitchell and co-defendant Johnny Orsinger were convicted in 2003 for the deaths of Alyce Slim, 63, and her granddaughter Tiffany Lee, 9.

The two men stabbed Slim dozens of times before stealing her vehicle and driving it to another location where they stabbed and beat the girl to death and dismembered their bodies to prevent identification. Mitchell and Orsinger used the vehicle to commit a robbery and when they were caught by police, Mitchell led them to the buried bodies.

Orsinger, who was a juvenile at the time, was sentenced to life in prison.

Attorney General William Barr resumed federal executions this month after a 17-year hiatus. The Bureau of Prisons executed three men -- Daniel Lewis Lee, Wesley Ira Purkey and Dustin Lee Honken -- within a span of a week. The men sued over the government's decision to use a single-drug lethal injection protocol, saying it violated the law which requires federal executions to use the same method as the individual states where the murders were committed.

If his execution proceeds, Mitchell will be the fourth federal execution this year and the first Native American to be executed in modern U.S. history, his lawyers said.

U.S. News // 45 minutes ago
McDonald's giving up businesses in Russia over war in Ukraine
May 16 (UPI) -- McDonald's announced on Monday that it's selling its operations in Russia as a result of the war in Ukraine -- which includes hundreds of restaurants and tens of thousands of employees. 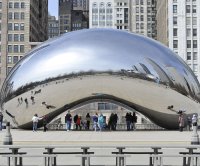