Hurricane Douglas is seen in the open Pacific Ocean on Monday afternoon after moving away from the Hawaiian Islands. Image courtesy NOAA/NHC

July 27 (UPI) -- Hurricane Douglas brushed the Hawaiian Islands early Monday as a Category 1 storm, and is expected to temporarily weaken before gaining speed in the coming days as it moves farther into the open Pacific Ocean.

After peaking as a Category 4 hurricane last week, Douglas was downgraded to a Category 1 hurricane with maximum sustained winds of 80 mph, the National Hurricane Service said in a 11 a.m. HST update Monday.

The hurricane center previously said Douglas had "rapidly" moved away from Kauai, one of Hawaii's two westernmost islands.

Douglas is expected to continue moving west-northwest over the next few days, with a slight turn to the west while it increases in forward speed. The hurricane center said the storm will slightly weaken, but remain a hurricane until it fully passes west of Kauai.

Before brushing Hawaii, Douglas had to battle through an area of moderate-to-high wind shear and cooler ocean water to maintain its hurricane status. Later Monday, it was forecast to be downgraded to a tropical storm and then to a tropical depression early Tuesday.

In anticipation of Douglas passing dangerously close to the islands, Hawaii Gov. David Ige issued a state of emergency declaration last week. Officials in Maui County warned residents that they should prepare to shelter in place as the storm approaches the island.

Sirens blared in Honolulu on Sunday as the storm approached.

Hawaiian Airlines canceled a handful of flights Saturday and Sunday and issued a travel waiver for all flights in and out of the islands through Tuesday.

Douglas was expected to bring enough rainfall to cause isolated flash flooding and mudslides across the islands.

AccuWeather senior meteorologist Alan Reppert projected stronger winds would come out of the northwest as the storm approached and then out of the south as it departed.

"These wind directions are not typical for the islands, which usually see a more easterly or northeasterly wind direction. As such, the winds associated with Douglas could cause more damage than you would initially expected at these speeds," he said.

Winds will gradually dissipate into the middle of this week as the storm loses wind strength and moves away to the west.

After spending some time as a Category 4 hurricane Thursday night, Hurricane Douglas began to lose wind strength Friday. At peak intensity, the storm churned through the Pacific with winds of 130 mph.

Despite sitting in the middle of the Pacific, Hawaii isn't struck by many powerful hurricanes. Should Douglas make landfall in Hawaii, it would be only the third hurricane in recorded history to do so since 1959.

Hurricane Lane came dangerously close in 2018 but didn't make landfall. It did, however, unleash record-breaking rainfall.

Arguably the most devastating storm in Hawaii's recorded history was Iniki in September 1992, when it caused billions of dollars in damage. Winds were recorded at 145 mph, and the story destroyed more than 1,420 houses.

Hurricane Olivia in September 2018 was the last tropical system to bring direct impacts to the islands. The storm made landfall on Maui and Lanai as a tropical storm, which was the first landfall on these islands in recorded history. 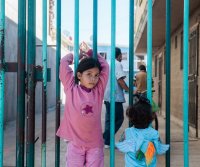 U.S. News // 6 hours ago
Moderna to begin vaccine trials on children
Dec. 2 (UPI) -- Moderna said Wednesday it plans to begin testing its COVID-19 vaccine on children between the ages of 12 and 17.