July 12 (UPI) -- At least 21 people including more than a dozen sailors were injured after a three-alarm fire broke out with an explosion on the USS Bonhomme Richard, the Navy said on Sunday.

The fire was reported at 8:30 a.m. as the ship was docked at Naval Base San Diego for repairs with 17 of the 160 sailors on board as well as four civilians sustaining non-life-threatening injuries, Naval Surface Forces reported on Twitter, adding all had been transferred to local hospitals for treatment.

Rear Adm. Philip E. Sobeck told reporters during a press conference Sunday evening that all hospitalized sailors were in stable condition, most of whom were suffering from either heat exhaustion or smoke inhalation.

Firefighters and sailors from all over San Diego were fighting the fire, he said, adding a 1,800-foot perimeter has been established around the vessel and nearby buildings while the U.S. Coast Guard is enforcing a 1-nautical-mile perimeter around the ship, which has a crew size of approximately 1,000.

"Just know that sailors across this waterfront are doing a magnificent job," Sobeck said. "They are fighting their ship and they're saving their ship."

Sobeck explained the fire is believed to have started in the lower cargo hold and the reported explosion was the result of "over-pressurization" caused by the fire heating up the enclosed compartment but it is unknown what caused the Class-A fire, which is fueled by paper, wood and other common items.

All personnel has been evacuated from the vessel and there were no ordinances on board when the fire ignited, he said, adding the 1 million gallons of fuel on board was "well bellow" any heat source.

Asked if the ship will ever sail again, Sobeck said "absolutely."

"She was already in the shipyard being worked on so, again, she was in a stage of repair anyway so we're just going to get right back at it once we get this thing contained and put out," he said.

The San Diego Fire Department earlier wrote on Twitter that it was combatting the blaze alongside Federal Fire and that multiple sailors were being treated for "a variety of injuries."

USS Bonhomme Richard is a Wasp-class amphibious assault ship that was commissioned in 1998. The name is derived from the pen name of Benjamin Franklin.

The ship appeared in two films, Battleship and Act of Valor.

All ships in port were directed to provide fire parties to possibly assist with the effort to combat the blaze and the USS Fitzgerald and USS Russell were shifted further away from the fire. 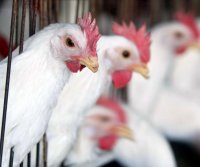