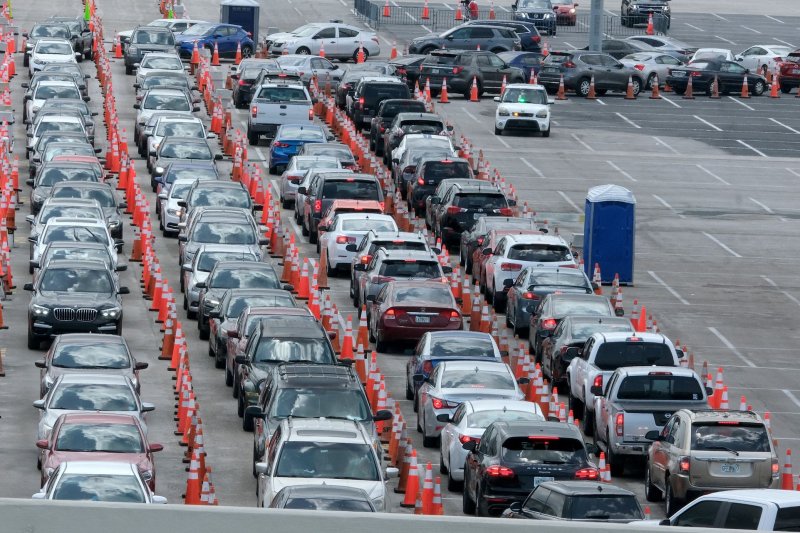 Residents wait in their vehicles to be tested for COVID-19 at Hard Rock Stadium in Miami, Fla., on July 2. Health officials say about half of all Florida intensive care units are at least 90 percent full. Photo by Gary I Rothstein/UPI | License Photo

July 10 (UPI) -- For the third time in a week, the United States has broken the single-day record for new COVID-19 cases -- and this time the tally exceeded 63,000 cases, topping the previous mark by thousands.

Updated data Friday from researchers at Johns Hopkins University said about 63,200 new cases were reported Thursday in the United States -- breaking the previous high, set Tuesday, by about 3,000 patients.

About 3.12 million cases and 133,300 deaths have been reported in the United States to date, according to Johns Hopkins.

Bed space in intensive care units and hospital vacancy is limited statewide. Health officials said about half of all Florida ICU units are at least 90 percent full and more than 400 patients were hospitalized Thursday, another record.

In Miami-Dade County, Florida's most populous, residents testing positive for COVID-19 rose to a record 33.5 percent on Thursday, according to health figures. The county's rolling 14-day average "positivity rate" was around 24 percent, a 6 percent increase since late June.

The positivity rate measures the share of the population who test positive against the total number of people who have been tested. Miami-Dade Mayor Carlos Gimenez has said the goal is to cap that rate at 10 percent.

RELATED WHO chief pleads for solidarity after Trump pulls U.S. from health body

President Donald Trump is scheduled to visit the area on Friday for multiple stops in Miami-Dade and Broward counties.

Despite the surge in cases, Walt Disney World theme parks in Orlando, Fla., are scheduled to reopen Friday. The Magic Kingdom Park and Disney's Animal Kingdom Park will reopen first, followed by EPCOT and Disney's Hollywood Studios next Wednesday, the company says on its website.

"From increased cleaning and disinfecting across our parks and resorts, to updated health and safety policies, we have reimagined the Disney experience so we can all enjoy the magic responsibly," Disney wrote in a blog post.

In Nevada, Gov. Steve Sisolak ordered that bars and bar areas in restaurants in some counties must close beginning Friday night. Restaurants in those counties also can no longer serve groups of more than six people.

Sisolak said he conferred with health officials who warned the state faces a "precarious condition" in which hospitals will be overwhelmed with patients in the "very near future."

The affected counties will be identified on Friday.

In Texas, Gov. Greg Abbott suspended elective surgeries in more than 100 counties amid greater crowding at hospitals statewide and a surge of seriously ill coronavirus patients.

The proclamation directs all hospitals in the affected counties to postpone surgeries and procedures that are "not immediately, medically necessary to correct a serious medical condition or to preserve the life" of patients.

As of Wednesday, there were only about 1,000 available ICU beds in Texas.

U.S. News // 10 hours ago
Trump calls for 'termination' of the U.S. Constitution in Truth Social post
Dec. 3 (UPI) -- Former President Donald Trump on Saturday called for the "termination" of U.S. rules and regulations, "even those found in the Constitution."

U.S. News // 17 hours ago
Four injured, one critically, after bus crashes through Calif. parking lot
Dec. 3 (UPI) -- Four people remained hospitalized Saturday, including one with critical injuries, after a transit bus crashed into more than a dozen vehicles in a California shopping center parking lot.

U.S. News // 18 hours ago
Tampa police chief placed on leave after golf cart traffic stop
Dec. 3 (UPI) -- The police chief of Tampa, Fla., has been placed on administrative leave after flashing her badge at a deputy who had stopped her while she and her husband were riding golf cart.

U.S. News // 22 hours ago
Pentagon unveils B-21 Raider, 1st new strategic bomber since Cold War
Dec. 3 (UPI) -- The U.S. Air Force has publicly unveiled the new B-21 Raider, the Pentagon's first new long-range strike bomber since the Cold War and touted as the "backbone" of a modernized bomber fleet.

U.S. News // 23 hours ago
Body of missing Texas girl found; Fedex driver charged with murder
Dec. 3 (UPI) -- The body of a missing 7-year-old North Texas girl has been found near her home and a delivery driver stands charged with kidnapping and murder in connection with her death, sheriff's officials say.