Prosecutors have said that Spc. Vanessa Guillen was bludgeoned to death with a hammer while on the Texas Fort Hood military base on April 22. Photo courtesy of U.S. Army/Twitter

In a statement, attorney Natalie Khawam wrote the Army confirmed to her on Friday that the bones, hair and other remains found near the base belong to Guillen who was stationed at Fort Hood.

"We are at a loss for words," Khawam said in the statement to FOX 7 Austin. "This should never have happened. Our country has lost a beautiful young soldier because the system is broken."

Guillen, 20, was last seen April 22 in the parking lot of her Regimental Engineer Squadron Headquarters at Fort Hood, spurring a search for her whereabouts that led to the discovery of a set of partial human remains late last month in an area of interest to the investigation close to Leon River in Bell County.

Last week, the Army Criminal Investigation Command identified Spc. Aaron David Robinson as a suspect in the case and said that he had died by suicide in the Texas city of Killeen after having fled Fort Hood earlier that day.

A second suspect in the case, 22-year-old Cecily Aguilar who has been identified as Robinson's girlfriend, has been arrested on accusations that she helped him dismember Guillen's body and then bury it in three different locations.

According to the criminal complaint, Robinson bludgeoned Guillen to death with a hammer on April 22 in the Armory where she worked before calling Aguilar to help him dispose of her body.

In a telephone interview with The Washington Post on Sunday, Mayra Guillen, Vanessa's older sister, said the family waited until Sunday to release the confirmation to allow for a priest and Army chaplain to formally notify Gloria Guillen, Vanessa's mother.

"She did feel Vanessa was no longer with us," she said. "She had a hard time accepting there isn't a whole body."

U.S. News // 7 hours ago
Thunberg to Congress on climate change: 'You still have time to do the right thing'
April 22 (UPI) -- Prominent climate activist Greta Thunberg, during a congressional hearing Thursday, challenged world leaders to end fossil fuel subsidies, end new exploration and extraction and completely divest from the industry.

U.S. News // 2 hours ago
Daunte Wright funeral set for Thursday; Al Sharpton to speak
April 22 (UPI) -- Daunte Wright, a 20-year-old Black man who was shot dead by police earlier this month in a Minneapolis suburb, will be memorialized with a funeral on Thursday. 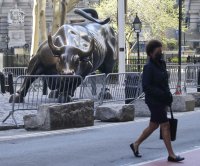