July 5 (UPI) -- Two people were killed and eight others were wounded in a suspected gang-related shooting at club in Greenville, S.C., early Sunday.

The shooting occurred around 2 a.m. at Lavish Lounge, according to the Greenville County Sheriff's Office.

"It's sad to see on any day," he said at an early morning press conference.

Investigators are seeking two suspects but do not have descriptions to release, Lt. Jimmy Bolt said.

All victims are being treated at Greenville Memorial Hospital, with conditions that range from minor to critical, Bolt said.

A sheriff's deputy heard gunfire from the club and he called for backup, Bolt said.

"There's a lot of shell casings inside," Lewis said at a news conference. "Everything is turned over. There are a few chairs in there, food on the floor, some bottles busted. You can tell somebody left in a hurry. There are some pretty large amounts of blood."

Lewis said a "very, very large crowd" was gathered for a concert at the club.

Night clubs are not allowed to be open under Gov. Henry McMasters executive order regarding the coronavirus pandemic. Lewis said they are looking to see if the club had been granted an exception.

Earlier Saturday morning, a shooting occurred at Dolce Club, which is next to the Lavish Lounge, injuring one security guard injured, the Sheriff's Office said.

Investigators are checking to see if there is a connection between the two shootings.

"We will certainly look at that. But at this point ... I don't know of any connections between the two," he told The Greenville News.

Lewis told CNN that investigators were looking into whether members of the music group performing at the club were involved. Greensboro, Ga., rapper Foogiano was promoted as performing at 9 p.m. Saturday, but it was not clear if other acts also played.

U.S. News // 19 hours ago
New Orleans authorities recover body of man trapped in collapsed hotel
Aug. 8 (UPI) -- Authorities have recovered the remains of 36-year-old Quinnyon Wimberly, who was trapped in a New Orleans hotel when it collapsed 10 months ago.

U.S. News // 23 hours ago
COVID-19: Florida hospitalizations up, Georgia schools grapple with cases
Aug. 8 (UPI) -- Hospitalizations and deaths due to the novel coronavirus continued to increase in Florida this week while school districts in Georgia grappled with positive cases among students and staff. 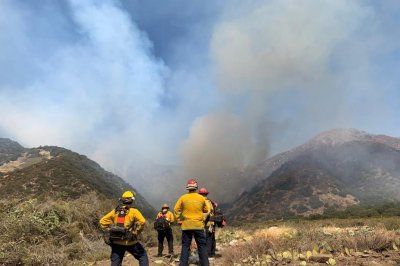